Nute Gunray or simply known as Viceroy was the leader of the greedy Trade Federation who appeared in the Lego Star Wars Series known as Droid Tales. He appears as the main antagonist of the first episode, Exit from Endor, and later serves as a minor antagonist in Separatist Crisis.

It is mentioned by C-3PO while he tells the story that the Trade Federation had invaded the planet of Naboo. When his underlings fail to shoot down the ship carrying Jedi Knights Qui-Gon Jinn and Obi-Wan Kenobi alongside the Queen and her aides, the Viceroy contacts his mysterious benefactor Darth Sidious to inform him of the situation. When Darth learns of the Federation's failure he angrily insults the Viceroy's incompetence and it is revealed that the two had made a pact in which the Federation would help the Sith Lord destroy the Republic. When Gunray asks Darth Sidious to explain why is it so important to capture Queen Amidala, the latter tells the cowardly Viceroy and his lieutenant Rune Haako to leave the Jedi Knights to his apprentice: Darth Maul. While the Gungan forces are seen via hologram running from the Federation's Droid Army, the Viceroy reveals that all of his battle droids are controlled from one ship (which shows his obvious stupidity) and then proceeds to express his faith in the possibility of being unstoppable, before immediately seeing hundreds of Nubian Starfighters attacking the  Droid Control Ship. The craft is ultimately blown up by young Anakin Skywalker while the Viceroy and his henchmen are defeated. 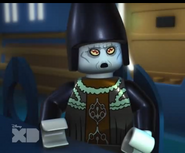