The 2nd Sage of the Six Paths

Sage Jutsu
Tobi (whose original name is Obito Uchiha) is the central antagonist of the Naruto franchise and the leader of Akatsuki. He is a fallen hero from Konohagakure, the Village Hidden in the Leaves, who follows Madara Uchiha's goal for his own gain. Despite appearing late in the story, Tobi orchestrated the attack of the Nine-Tailed Demon Fox, the Massacre of the Uchiha Clan, and most of the conflict driving the story from behind the scene.

As Tobi, he assisted Zetsu with locating Sasori's body. Once he found it and took Sasori's ring, he expressed his belief that he would now be able to join Akatsuki. They next tracked down Deidara's disembodied arm with its ring still attached. Tobi initially believed Deidara had also died, only for Deidara to appear before them shortly afterwards. Tobi was somewhat relieved to see him, but was concerned for both his well-being and capability with rather offensive jokes, provoking Deidara to strangle him with his legs.

Tobi was indeed accepted into Akatsuki as Sasori's replacement, partnered with Deidara. He was assigned to capture the Three-Tails. In the anime, Deidara treated Tobi to some dango before the mission, a ploy to get him to remove his mask. He turned away while he ate, preventing Deidara from seeing anything. They split up after eating and Tobi eventually found Konoha shinobi using the Four-Corner Sealing Barrier, which he deduced was meant to seal the Three-Tails. He informed Deidara of his discovery and they approached and killed t two Anbu put in charge of the sealing.

I can sense his presence. Why? Because I can tell from their movements that my Kikaichuu are still draining his Chakra. The Insects that were tracking his Chakra lost him completely. No its not the Body Flicker technique. Why? Its because my insects would've followed his direction anyway. He managed to teleport without using any seals, summonings, or markings? That means he has a Space-Time ninjutsu even better than the Fourth 's. His body completely disappeared. Can he simply vanish out of existence? If he can actually disappear at will, I wouldn't be surprised if he can do it to just his body parts as well. It would explain why only a part of his body managed to bypass earlier attacks. To us, it only looks like they made contact, but they actually missed their marks. So basically, he's not dodging the attacks. They're just going straight through him. 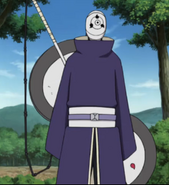 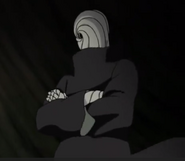 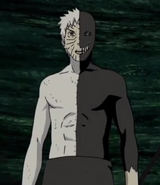