Ochaco Uraraka (お Uraraka Ochako?), also known by her Hero name Uravity, is a student of U.A.'s Class 1-A, training to become a Pro Hero. She is also one of the protagonists of My Hero Academia. 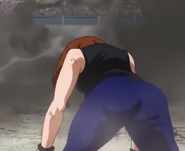