The Squirtle Squad's leader is referenced in Pokémon Yellow, when an Officer Jenny tells the player she has caught a Squirtle that was constantly getting into mischief. She mentions it needs a good Trainer to take care of it, and will give it to the player after he/she defeats Lt. Surge.

Their first appearance was Here Comes the Squirtle Squad. They used to run wild in a small town in Kanto stealing things, writing graffiti and causing trouble for travelers in the area. Once they were tricked by Meowth of Team Rocket, who made a deal for them to help himself, Jessie and James capture Ash's Pikachu. While chasing it, Pikachu sustained a nasty injury from a Goldeen. In order to help Pikachu recover, Ash convinced the Squirtle Squad to allow him to obtain a Super Potion; however, if he didn't return by noon the next day, they would kill Misty (in the dub, they threatened to dye her hair purple). By the time Ash returned, Team Rocket had arrived and decided to bomb the Squirtle Squad, causing a forest fire. Everyone went to find cover in the Squirtle Squad's cave, but, the leader of the Squirtle Squad was stuck on its back, forcing Ash to go back to help it. Working together with Ash, the Squirtle Squad defeated Team Rocket and put out the fire; they were given the title of "Town Fire Fighters," for their good work by Officer Jenny. However, the leader of the Squirtle Squad decided that it would rather travel with Ash; Ash's newly-acquired Squirtle wanted to repay him for saving its life by joining Ash's team. The Squirtle Squad reunited with its leader when they entered a Pokémon firefighting competition in Johto in the episode The Fire-ing Squad!. They were pitted against Team Wartortle, a group Ash's Squirtle had encountered in the Orange Islands. Ash's Squirtle decided to rejoin the Squad and has continued with them ever since, with the exception of the Silver Conference and the final battle with Brandon. The Squirtle Squad, including Ash's Squirtle, appeared in Of Meowth and Pokémon (Part 1) and Of Meowth and Pokémon (Part 2). Three of the members ambushed Smoochum and attacked her with a Water Gun, sending her flying. The members of the Squirtle Squad minus Ash's Squirtle also appeared in Pichu Bros. in Party Panic helping Meowth set up his party. Ash's Squirtle's glasses reappear in Beach Blank-Out Blastoise when helping a Wartortle. 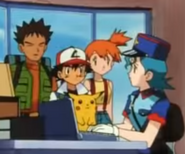 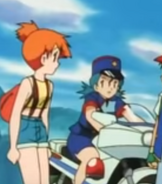 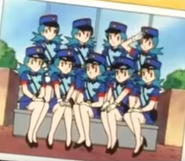 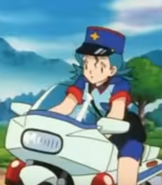