Sacred World of the Kais

Oolong (ウーロン) is a protagonist in the Dragon Ball mangaand its anime adaptation Dragon Ball, making minor appearances in Dragon Ball Z and Dragon Ball GT as well. He is an anthropomorphic, shapeshifting pig who met Bulma andGoku while on their quest finding the Dragon Balls. After their adventure, he begins living at Capsule Corporation in West City. He plays a large role in the beginning of Dragon Ball, but by the end of Dragon Ball Z, he just shows up from time to time in the company of Master Roshi.

Oolong's character dwindles to little importance, although in the anime and several movies, he appears quite often as a comic relief character. In Dragon Ball Z: The World's Strongest, soon after discovering the Dragon Balls have all gathered in one place, Oolong steals Bulma's Dragon Radar, and lures Gohanwith him to the Tsumisumbri Mountains to verify their discovery and hopefully wish for another pair of panties.

Battle against the Saiyans

Five years later, he asks Shenron if he can kill the Saiyans instead of reviving Goku, but Shenron says he cannot do this. At Kame House, he watches the battle against the Saiyans from television, and later withFortuneteller Baba's Crystal Ball. In a rare moment of compassion, he cries out when Puar faints, their rivalry long forgotten.

Journey to Namek and the space tyrant Frieza

Oolong, along with Puar and Dr. Brief, watch Goku in the Capsule Corporation spaceship head to Namek to help his friends collect the Dragon Balls to revive their fallen friends. They become concerned for Goku when his ship malfunctions in a storm, but cheer when Goku is fine.

Later, Oolong, Puar, Master Roshi, Yajirobe and Chi-Chi try to go to Namek with Dr. Brief's ship, but to Oolong's delight, their ship breaks down before takeoff. 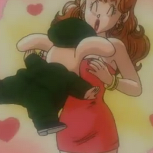