Start a Wiki
When Stark visited Japan to witness the opening of the new Arc Reactor power plant and the demonstration of the Dio armor, Pepper took charge of the company until her boss returned from his trip. 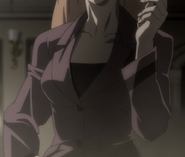 Add a photo to this gallery
Retrieved from "https://xianb.fandom.com/wiki/Patricia_%22Pepper%22_Potts(Earth-101001)?oldid=303784"
Community content is available under CC-BY-SA unless otherwise noted.