PEPPER POTTS may not know that her pal Tony Stark is actually Iron Man, but her quick wit and energetic attitude often tangle her up in both of his dual lives. The tomboy manner she picked up as the daughter of an FBI agent makes her an ideal comrade for Tony and his best friend, Rhodey. Pepper is very sharp and naturally curious - how long will it take her to uncover Tony's secret?

Pepper is very hyperactive and chatty, making her kind of a comical relief. When asked why Stark never told her he was Iron Man, Tony replied because she was never "stopped talking long enough for him to tell her"; her father once commented in a half-asleep state that she talks too much; in Field Trip, her incessant chattering unnerved a security guard to her point where he handcuffed her to keep her out of his way; and SHIELD once threw her out of the Helicarrier because she wouldn't stop asking questions. Even Rhodey, despite being her friend, refers to her as a little on the crazy side.

Because of her hyperactive demeanour, Pepper tends to overreact, and she is also quite adventurous and an impulsive risk taker. After learning about Iron Man's secret, she insist of getting into the action any chance she gets, eventually beginning to pester Tony about building a suit for her own use, which he finally consents to. She also has huge dreams to be a SHIELD agent, though solely for the thrill of adventure she perceives in that profession.

Despite her faults, she is able to gather information on pretty much anyone, making her a vital member of the team when it comes to gathering information. She can also use this information to her advantage and through it read people's actions, such as when she knew how to throw a villain off of his game by insulting him. She also claims that tense situations cause her to focus, which is why she could easily pilot the Rescue Armor during an invasion with little training beforehand.

She then participated in stopping Mandarin's attack and now the Makluan invasion. In the end, their secret identities were accidentally revealed to the public especially their parents who are proud of them.

At the ending, she was with Tony and Rhodey flying around the city wondering what would happen to them in the future since now the world knew who they are.

Rescue Armor: Pepper Potts gets her own Iron Man suit in The Dragonseed. It has the following capabilities:

Pepper is a normal human with no powers and is no stronger than an average human teenage girl. But she has proved that she is good at organizing plans, investigation and information gathering (particularly when using her father's computer link to the FBI mainframe). She was also taught how to operate the Iron Man Armory Terminal by Tony Stark. 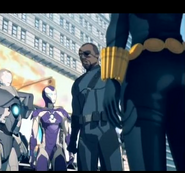