Paulina  is a Hispanic cheerleader and the most beautiful and most popular girl at Casper High School. She is voiced by Maria Canals Barrera.

Paulina is first seen in "Parental Bonding", all of the boys fawning over her. Danny plans to ask her out to the school dance. When she makes fun of him, Sam comes over and insults her. Planning to get revenge on Sam and thinking Sam has a crush on Danny, Paulina accepts Danny's offer, who gifts her an amulet. Danny finds out later that the amulet is enchanted, and attempts to take it back from her during the dance, using the excuse that it belongs to Sam. While Danny's overshadowing his father, Sam goes into the bathroom with Paulina, explaining that she only sees Danny as a friend and would like the amulet back. Paulina gives it back, revealing her cruel reason for going to the dance with Danny and announcing her plan to dump him. This angers Sam enough to turn her into a dragon, scaring Paulina enough to make her faint. As the dance finishes up, Dash is seen flirting with Paulina, but Sam lets go of her issues with Paulina for the time being.

Paulina is one of the humans that Walker and his goons overshadow in "Public Enemies". Meeting Danny Phantom after he saves her, Paulina realizes that he's a good ghost. She begins to have feelings for Danny after this experience, decorating her locker with pictures of Danny. At the water park in "Lucky in Love", Kitty overshadows her and starts dating Danny after pretending to find out his secret. After he discovers what's going on, Danny saves her again, much to her increasing gratitude.

In "Reality Trip", Paulina and the rest of the world find out the connection between Danny Fenton and Danny Phantom. She, along with the rest of the popular kids, helps him and his friends escape from the Guys In White and kisses him, putting Sam into a jealous rage.

Since she is only a normal human girl, she has absolutely no powers at all, however she has shown several ghost powers, usually because of another ghost that is possessing her or something similar, the powers she showed are:

Is worth noting that most of these powers weren't from her, if not of the ghost that possessed her. 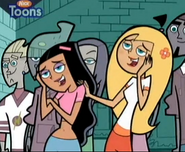