Penny is a fictional character on the CBS television series The Big Bang Theory, portrayed by actress Kaley Cuoco. Penny is Leonard Hofstadter and Sheldon Cooper's neighbor across the hallway and is a "cheesecake-scented goddess" in the words of Wolowitz. Originally from Omaha, Nebraska, she is a waitress at the local Cheesecake Factory who, apart from auditioning for several acting positions, is also writing a semi-autobiographical screenplay about a girl from Lincoln, Nebraska, who travels to Los Angeles to become an actress but ends up working at the Cheesecake Factory.

Penny appears in a scene in which Carter Pewterschmidt is watching the show in "Business Guy". As Penny had no speaking lines, it was unnecessary for Cuoco to reprise her role. 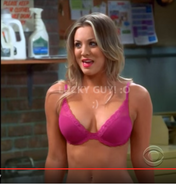 Add a photo to this gallery
Retrieved from "https://xianb.fandom.com/wiki/Penny?oldid=332685"
Community content is available under CC-BY-SA unless otherwise noted.