Legs Go All The Way Up Griffin

Church of the Fonz

Retarded
Peter Löwenbräu Griffin, Sr., born Justin Peter Griffin according to his birth records, is the protagonist of the show and title character. He's a man of Irish descent currently residing in Quahog, Rhode Island with his wife Lois Griffin. In "Padre de Familia", he was born in Mexico, where his mother had tried unsuccessfully to abort him. Peter agreed to abandon a revolt of his father-in-law Carter Pewterschmidt's servants in exchange for him using his connections to make Peter a United States citizen. According to "I Dream of Jesus", Peter attended Providence High School. Together, Peter and Lois have three children, Chris, Meg, and baby Stewie. After a mix up at a sperm bank, Peter also became the biological father of Bertram. In addition, he and Lois had a child named Peter Griffin Jr. who died when Peter shook him too much as revealed in "The Juice Is Loose". Out of pity he also adopted an intellectual talking dog named Brianwho formerly lived on the street as a stray, an accepted fact in Brian's two adoption stories. In The Real Live Griffins he was portrayed by Tom Arnold.

In "The Tan Aquatic with Steve Zissou", Lois says that he's 43. Lois does say that she is 42 at this time, which would match the age difference stated in "Let's Go to the Hop" and ignore their both being 18 in "Meet the Quagmires". Peter celebrates another birthday in "Baby, You Knock Me Out" and should turn 44 but no age is identified in the episode. In "Underage Peter", Mayor Adam West gives Peter's age as 42.

Before Peter was born, his mother Thelma went to Mexico City to have an abortion.[40] However, she gave birth during the procedure, and smuggled him home to Providence, Rhode Island, where he spent his childhood.[40][41] Peter was raised by Francis and Thelma Griffin in the Roman Catholic faith.[42] However, in "Peter's Two Dads", he discovers that his biological father is an Irishman named Mickey McFinnigan.[43] Peter visits Mickey, who initially rejects him. Mickey later accepts him as his son after beating him in the "game of drink" (the game of drink referring to matching shots until one passes out).[43] Mickey is based on the friends of MacFarlane's father. MacFarlane said: "When I was growing up, my father had lots of friends: big, vocal, opinionated New England, Irish Catholics. They were all bursting at the seams with personality, and Family Guy came out of a lot of those archetypes that I spent years observing."[39]

Peter has also referred to a large number of ancestors throughout the series, stating, "the Griffin family history is a rich tapestry".[44] Famous ancestors of Peter include MosesGriffin, who led the Jews out of Egypt; Willie "Black-Eye" Griffin, Peter's great-grandfather, a 1920s silent film star, Osias Griffin, an owner of one of the first dozen telephones; and Peter Hitler, the flamboyant brother of Adolf Hitler. Peter's ancestor Nate Griffin, an African American slave from Virginia, was owned by Lois' ancestors. He fell in love with their daughter, and secretly raised a family with her. Nate's family was eventually discovered and they escaped.

The voice of Peter is provided by MacFarlane, who also provides the voice for Brian, Stewie and Quagmire, MacFarlane also provides the voices for various other recurring and one-time only characters, most prominently those of news anchor Tom Tucker, Carter Pewterschmidt (Lois' father), and Dr. Hartman.[17] MacFarlane has been part of the main voice cast from the beginning of the series including the pilot, as well he has been voicing Peter from the start. MacFarlane chose to voice Peter and the rest of characters' voices himself, believing it would be easier to portray the voices he already envisioned than for someone else to attempt it.MacFarlane's speaking voice is not very close to Peter's; he uses his normal voice as the voice of Brian.[19] MacFarlane drew inspiration for the voice of Peter from a security guard he overheard talking while he was attending the Rhode Island School of Design;[20] according to him, "I knew a thousand Peter Griffins growing up in New England. Guys who would not think before they spoke, like [switching to Peter's voice] there was no self-editing mechanism. [Pointing to himself] Everything in here, [pointing to his front] it's coming out here".[21] MacFarlane also voices many of Peter's ancestors who share the same type of voice.[18] He noted in an interview that he voices Peter and the rest of the characters partly because they initially had a small budget, but also that he prefers to have the freedom to do it himself.[22] In another interview, he mentioned that Peter's voice is one of the most difficult to do.

There have been several occasions where MacFarlane does not voice Peter. In the episode "No Meals on Wheels", (season 5, 2007) actor Patrick Stewart voiced Peter in a cutscene, but MacFarlane voices Peter for the rest of the episode.[24] In the episode "Family Gay", (season 7, 2009) Seth Rogen provided a guest-voice as Peter under the effects of the "Seth Rogen gene".[25] In "Road to the Multiverse", (season 8, 2009) he was voiced by Japanese actor Jameson Yang, who was required for a scene where everything in the world was Japanese. 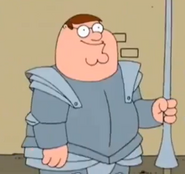 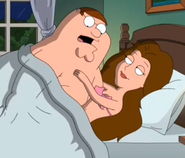