Since he was young, Peter Parker was encouraged to pursue science by his uncle Ben, an optimistic person who also taught Peter a lesson in responsibility through his motto, "with great power comes great responsibility."[2] While attending Midtown High, Peter befriended Harry Osborn, the son of Oscorp Industries's CEO. The two remained friends even after Harry was accepted into an academy for geniuses, Horizon High.

During a school trip to Oscorp Tower, Peter was bitten by one of the experimental spiders that escaped during a breach.[3] While reeling from the effects of the spider bite, Peter discovered he had developed amazing spider-like abilities. Still amazed by these new powers, Peter decided to approach this predicament using the five steps of the scientific method: observation, hypothesis, prediction, experimentation and conclusion.[4] While examining his new abilities, Peter developed two web-shooter bracelets to make up for the fact he didn't seem to inherit the spider's ability to generate webbing.[5] While trying out his ability to swing from weblines, Peter was inspired by a fortune-teller to use his powers to pursue fame and fortune, while still keeping his identity a secret. With the resources from his house, Peter created a costume. The young boy subsequently chose wrestling as the stepping stone to stardom,[6] using the stage name "the Spider."

While getting ready to confront professional wrestler Bonesaw McGee as part of the show So You Want to be a Wrestler?, a fleeing thief ran past Peter. Having determined that catching the criminal wasn't his responsibility, Peter didn't intervene. As the Spider, Peter easily defeated his opponent in the ensuing wrestling match, winning a trophy.[1]

When he returned home, Peter learned his Uncle Ben had been murdered by a burglar he surprised trying to break into their house. Fueled by rage, Peter suited up and confronted the murderer in the warehouse where the police had notified he was holding up. As soon as Peter got a close look at the criminal's face, he realized it was the very same thief he didn't lift a finger to stop earlier that very same night. When Peter returned home following the burglar's arrest, he discovered he had finally realized the true meaning behind his Uncle Ben's motto. Deciding to honor the memory of his uncle, Peter set out to use his powers to help people, wearing a new refined costume and taking up the superhero alias of Spider-Man.[2]

Before the death of his Uncle Ben, Peter was content with using his newly gained powers as a vehicle for fame and fortune, showing off his powers in public without a disguise and even using them to win a wrestling match. During this time, Peter was arrogant and vain, caring about his public image more than doing the right thing, such as when he didn't go after an armed Burglar because he wanted to 'save' his moves for the judges.

After the death of Uncle Ben, Peter learned what truly mattered in life and decided to use his powers not for fame or fortune, but for heroism. Selfless and brave, Peter took the lessons from his late uncle to heart and used his powers with responsibility and protected civilians from the criminals and villains that would risk their safety.

Peter is a friendly, good-natured, high-spirited and caring young man who shows his loved ones constant respect and affection. Because of these traits, Peter has been shown to make friends quite easily as he quickly befriended Miles Morales and Anya Corazon.[7] In spite of his good nature, Peter can be ruthless if pushed hard enough, as he brutally beat up the burglar who took Uncle Ben's life by smashing him through crates and throwing him around, going as far as to say he just wants to hear the burglar scream.

Spider Physiology: After being bitten by an experimental spider from Oscorp, Peter's physiology mutated, developing abilities similar to that of a spider.

Genius Intellect: Peter appears to possess a great intellect, being able to create his own web-shooting devicesfrom seemingly scratch.[5]

Science Passionate: As an enthusiastic scientific mind, Peter appears to be an excellent science student.[3]

Hand-to-Hand Combatant: Spider-Man seems to be a good fighter, having improved a lot in only two weeks of training as Spider-Man. However, he doesn't seem to be skilled in any martial art, as he combines the use of his speed, agility and spider webs, instead. 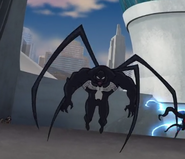 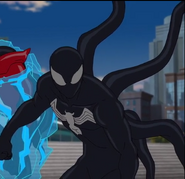 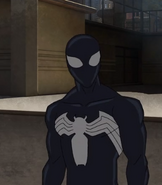 Add a photo to this gallery
Retrieved from "https://xianb.fandom.com/wiki/Peter_Parker(Spider-Man)_(Earth-TRN633)?oldid=396029"
Community content is available under CC-BY-SA unless otherwise noted.