He is the protagonist of the series. Bitten by a genetically altered spider, Peter donned a spider costume and sought to fight crime after allowing a burglar to escape, only to have that same criminal who was thought to have killed his Uncle Ben. He learned that "with great power comes great responsibility", a phrase that now drives him to act as a super hero. The series focuses on the character's struggles while leading a double life as Parker in Midtown High and as the superhero Spider-Man, with his friendships often being damaged by his need to head off to deal with the next super-villain incident. He gets a job at the Daily Bugle so he can support his Aunt May with financial troubles. Despite their financial troubles, the 16-year-old and his Aunt May have a great relationship. His best friends in school are mainly Gwen Stacy, Harry Osborn and gradually Mary Jane Watson. He is often bullied and being referred to as "Puny Parker" by his peers, and although his powers have given him confidence, he often has to take the taunts to stop anyone suspecting his secret.[4][9] Josh Keaton stated "I grew up reading comic books and Spider-Man was always one of my favorites. I felt that I always identified with him. Spider-Man is awesome. I definitely was a huge Spider-Man fan growing up and still am." Before he was chosen for Spider-Man, he auditioned for the role of Harry Osborn and Eddie Brock as well. 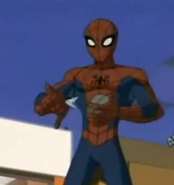 Add a photo to this gallery
Retrieved from "https://xianb.fandom.com/wiki/Peter_Parker_(Spectacular_Spider-Man)?oldid=371098"
Community content is available under CC-BY-SA unless otherwise noted.