Spider-Girl is a vigilante from New York City.

When a Green Goblin from an alternate universe came to get Spider-Girl's DNA, Spider-Man from said universe arrived to save her. At first Spider-Girl didn't believe him and thought he was just a boy in a Spider-Girl suit but eventually Spider-Man convinced her.

Petra Parker (Earth-TRN454) 002 Meanwhile, Green Goblin found this universe's version of the Green Goblin, he teamed-up with her to defeat Spider-Girl. But Green Goblin stole Spider-Girl's DNA anyway. Norma asked Norman to give her Goblin Serum, because they made a deal. After drinking it, Norma transformed into a monstrous version of herself, fully becoming She-Goblin. Later Spider-Girl runs out of web fluid and falls off of the Georgia Washington Bridge but Spider-Man saved her with his webbing. They defeated Norma and Spider-Girl thanked Spider-Man for help. After that Spider-Man used Siege Perilous and transported himself to another universe.[1] Spider-Man later summoned Spider-Girl to Earth-12041 to defeat Spider-Goblin, who is Norman Osborn but transformed into a giant spider monster thanks to alternate universe Spider-Men's DNA. They defeated Spider-Goblin and Electro with a team work. 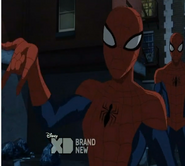