Xianb Wiki
Register
Don't have an account?
Sign In
Advertisement
in: Sword Wielders, Army of Light, Attack on Titan Universe,
and 10 more

She was a hand-picked soldier of the Survey Corps by Levi Ackerman placed in the Special Operations Squad. She was killed by Annie Leonhart in her Titan form during the 57th expedition.

She is later selected to become a member of the Special Operations Squad and is ordered to guard Eren Yeager. It is established that she greatly admires Levi, and argues frequently with Oluo Bozado over his imitation of their commander and his harsh behaviour.

While initially wary of Eren and quick to draw her swords when he transforms by accident,[5] she readily accepts him afterwards. She is the first of the group to bite her hand in imitation of Eren's method of transforming, and notes that doing so is actually quite painful.[6] She serves as a gentle, almost maternal presence within the squad and discusses with Eren the importance of trusting one's comrades completely.

When the Female Titan begins her attack on the 57th Expedition, Petra is one of those most vocal about Eren avoiding battle. She repeatedly begs him to trust in his commanders and comrades, and accept the sacrifices of others so that the mission can keep going.[8] Eren eventually makes the decision to follow her advice, allowing the Survey Corps to successfully capture the Female Titan in a trap.[9] Afterwards, the Special Operations Squad climb to one of the giants trees. 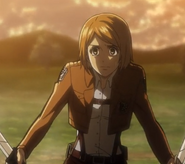