Jasmine first appears in Aladdin (1992), as the oldest daughter of the wealthy Sultan of Agrabah. Jasmine was unhappy with having no choice in life, and being ruled over by her father. So she runs away from home the palace life for a more simple life with freedom. After escaping to the town of Agrabah that surrounds the palace walls. This is where she meets Aladdin. Jasmine first meets him by giving an apple to a hungry child. She did not pay for this apple so the owner wants to cut off her hand as payment. Though Aladdin quickly comes in to her rescue and convinces the man that Jasmine is his crazy sister who thinks his pet monkey is the Sultan. Jasmine quickly catches onto what Aladdin is doing and goes along with the story. Later they both run off together to Aladdin's house where they both realize that they want to be free of the life that they are living and they have the same dreams. Though shortly after this Aladdin is arrested by guards led by Razoul. Jasmine reveals herself to them and demands them to let Aladdin go. However, Razoul apologizes and explains that he is doing so on Jafar's orders. Jasmine confronts Jafar and orders them to release Aladdin, but Jafar tells her that Aladdin has already been executed; Jasmine is left distraught and she blames herself for Aladdin's misfortune. After Aladdin's wish to become a prince is granted to him by The Genie, he visits Jasmine in the guise of "Prince Ali-Ababwa". She initially believes him to be just another arrogant suitor, but later accepts his proposal after falling in love with him on a magic carpet ride. During this time, Jasmine sees through Aladdin's disguise, but Aladdin convinces her that he sometimes dressed up as a commoner to "escape the pressures of palace life", which she relates to. She is taken back to the palace and the two share a kiss.

However, upon announcing her decision to marry Aladdin, Jafar takes over Agrabah by stealing the lamp from Aladdin. At the same time, Aladdin attempts to reveal his true identity, but before he can do so, Jafar already exposed his identity to Jasmine. After Jafar banishes Aladdin to the ends of the Earth, he then makes Jasmine his personal slavegirl. Jasmine was then forced to wear the revealing costume of a harem concubine and leashed to Jafar's throne to serve him. While Aladdin is banished to the frozen tundra, Jasmine must endure Jafar's lecherous advances and humiliations. When Aladdin finally returns, he goes to rescue Jasmine and saves the kingdom. Jasmine helps Aladdin to distract Jafar by seducing him and pretending to fall madly in love with him. After Jafar discovers her lie, Jasmine tries to steal the lamp in order to restore her father's kingdom. She is then trapped in an hourglass, and nearly dies from lack of air. In the end, she is saved by Aladdin and returns to be the Princess of Agrabah, with her father, the Sultan.[7] After seeing how much Jasmine loves Aladdin, her father allows her to marry any man she feels is worthy, and the two are engaged. 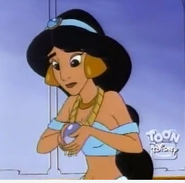 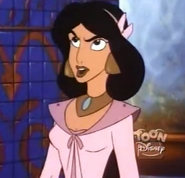