She is the daughter of Kashekim Nedakh, King of Atlantis, and later becomes Queen and the assumed wife of Milo.

Despite being born a princess, Kida is not marketed as a Disney Princess possibly due to her film's poor box office results.

At a very young age, Kida is present when a gigantic tsunami threatens the central city of Atlantis. She watches in tears as her mother is suddenly chosen by the Heart of Atlantis to save the city, leaving the young child behind. Her father quickly covers her eyes so as not to look directly at the crystal, but he does and becomes blinded as a result.

Centuries later, Kida leads a small group of hunters and gathers through the earth's many caverns and catacombs when they notice a large group of outsiders approaching their city. They keep watch on them with her believing that their being able to find Atlantis could mean that they could be of help. When the expedition desperately escapes an attack from fireflies, they come upon a lone member who is injured. Kida decides to help heal the outsider before taking off.

When the expedition eventually finds Atlantis, Kida and her group confronts the expedition. When the man she had just healed reveals that he can speak Atlantean, she opens up to them and immediately takes them to her father. However, her father demands that they leave without explaining why. When left alone, she gets into an argument with her father regarding how their way of life is dying while he believes it is being preserved.

Unconvinced, Kida singles out the man who is named Milo Thatch. Realizing that she does not even know how to read the Atlantean written language, he agrees to help her as they explore the city. They come to a pond where underneath are numerous writings she has him translate. He is able to figure out information regarding the Heart of Atlantis, which is the power source keeping the city alive and was what took her mother away.

Upon surfacing, they find that the rest of the expedition plan to steal the Heart of Atlantis and sell it on the black market. Their leader Lyle Rourke forces Milo to cooperate by having a gun pointed at Kida. Kida watches in horror as they ransack her father's chamber, which is followed by the leader striking her father down before he figures out where the Heart of Atlantis is hidden. Inside the Crystal Chamber, she is called upon by the crystal and she bonds with it before being encased within a container.

Kida remains inactive as a battle ensues for her, of which Milo is successful in bringing her back to the city in time for her and the Heart of Atlantis to raise the giant stone guardians from their slumber and great a force field to protect the city from an awakened volcano. With the city saved, Kida is released from the crystal and leaves her with a bracelet of hers that her mother held onto when called upon previously by the crystal.

Because of her father's death, Kida becomes the Queen of Atlantis. Milo stays behind, having fallen in love with her and to help the civilians rediscover their lost culture. Among her first acts is for a stone effigy of her father be constructed to join the other stone effigies of the past kings orbiting the Heart of Atlantis that now hovers over the restored city.

Queen Kida and her new husband King Milo, who is now adjusted to living in Atlantis, try to help a young girl named Nabi rescue her older brother Buke after he gets lost in a cavern outside the kingdom.

Kida, as Queen of Atlantis, is working with Milo, who is now her husband, to use the Heart of Atlantis to rebuild the civilization. They are unexpectedly visited by their comrades from the first film. They learn that a creature called the Kraken, which is presumed to be an Atlantean defense mechanism, is attacking a town. Kida and the others travel and are able to stop the creature.

While Kida adjusts well to the outside world, she feels guilty because there could be more Atlantean machines wreaking havoc. Kida and the others travel to Arizona, where they find a town with a statue that appears to be of Atlantean origin. They are also forced to confront the coyote spirits who oppose them. A Native-American man is able to serve as a median, and Kida learns that she has the power to choose Atlantis's destiny.

Later, Kida and friends travel on a search for the Gungnir, a mythical spear of Atlantean origin. They track the thief, a man named Erik Hellstrom, to the Nordic Mountains. There, he presumes Kida to be his daughter (Erik believes himself to be Odin), and kidnaps her. Hellstrom intends to end the world by bringing about Ragnarok, and creates various beasts. Kida is able to retrieve the spear after Vinnie provides a distraction.

As a result of the adventures, Kida learns about the power of the Atlantean crystal and comes to believe that her father was wrong for hiding it. She combines the Heart Crystal with the spear, and uses its power to raise Atlantis to the surface. It should also be noted that unlike in the first film, Kida for some reason does not have the extra tattoos obtained on her face from her wedding to Milo/coronation as Queen. 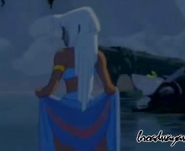 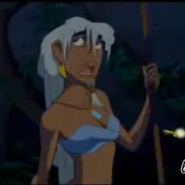 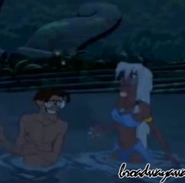 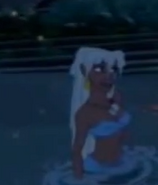 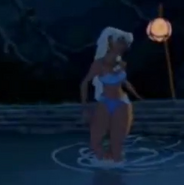