Princess Looma Red Wind is a character in Ben 10: Omniverse. She is the princess of the desert planet Khoros and daughter of Warlord Gar.

In Many Happy Returns, Looma fought Ben, Rook,Gwen and Kevin. It is later revealed that because of a deal made years ago, she would marry Kevin. Looma's father, Gar Red Wind, threatened to destroy Earth if Kevin was not surrendered to Looma. Ben interrupted the wedding and challenged Looma to a fight (which Four Arms won), only to discover that female Tetramands fall in love with and marry the male beings who defeat them, which cancelled her engagement to Kevin and put Ben in his place as Looma's fiance, set to wed in three Earth years. Looma was happy and honored to lose to Four Arms as she always knew Kevin "wasn't husband material" and left Ben with some of her plans for their upcoming wedding much to Ben's dismay, the latter muttering: "Kevin is so dead."

In Rules of Engagement, Looma returns attempting to collect four items for their wedding, specifically something conquered, bruised, severed, and blue. Looma battled the tribe of Ester to capture one of them as something conquered and Ester asked Ben for help. Looma was happy to see Ben again, but was busy with collecting the items. Ben tried to stop her, but she tossed him aside and took Ester, Rook,Julie and Julie's boyfriend, Hervé, for being a photographer. She also capturedFistina's right hand, which leads to Fistina and Ben getting it and "Little Rook" back. Looma went to Ben's house and was happy to see her "mother-in-law" and presented her "offering gifts". When the "offering gifts" tried to escape, Looma tried to re-capture them. Looma fought Julie when she heard that she is Ben's girlfriend, not knowing that they broke up. With a little help from her friends, Julie was able to defeat Looma. Looma was saddened, but accepted her defeat. However, Looma promised Julie that she would crush her skull next time they meet.

Looma was mentioned by her father in OTTO Motives, who stated that she was out crushing a rebellion in her father's territory.

In Catfight, Looma defeats all available male Tetramands (two of which being Bahrvad and Gorvan), on Khoros and finds them to be lacking. Not wanting to be the first princess to reach ascension without being betrothed, she decides to go after the one male Tetramand who had ever defeated her, Four Arms. When she reaches Earth, she finds competition from Attea, but grudgingly works together with her to free Rath fromNyancy Chan's hypnotic control. When a remote control that could change Ben at will enters the fray, Looma ends up fighting for it with Attea and Nyancy, wanting to change Ben into Four Arms and have him as her betrothed. Eventually, the remote is destroyed, and Ben convinces Looma and Attea that they don't need a "trophy husband" to be good rulers, though they then start arguing over who is the "ineffective leader" in need of a husband.

In The Most Dangerous Game Show, Looma is one of many contestants trying to win Ben's hand in marriage on Charles Zenith's game show. 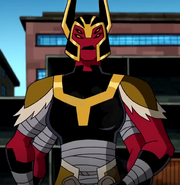