Xianb Wiki
Register
Don't have an account?
Sign In
Advertisement
in: Toonami Universe, Divas, Department of Research and Development,
and 7 more

A Pimp Named Slickback takes Tom to his palatial home and tries to teach Tom that he can extort respect from women by hitting them and tells Tom to refer to his wife as a "bitch". He pits Tom against "Sweetest Taboo" (voiced by Miss Kittie) one of his prostitutes, who begins to treat Tom very disrespectfully. When Tom refuses to hit her, she promptly begins to savagely beat him up. The lesson is interrupted when "Quiet Storm," a prostitute who works A Pimp Named Slickback's extensive surveillance network, reveals that Usher and Sarah have agreed via her MySpace, which Tom did not know she had, to meet that very afternoon. Finally showing a little spine, Tom angrily demands that A Pimp Named Slickback take him there immediately. The pimp decides to, impressed that the "nigga" can get some bass in his voice after all. 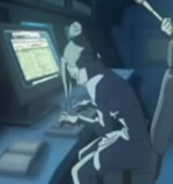