Start a Wiki
Raphael is one of the four main characters, which are all turtles. He wields a pair of sais and has a red bandanna.

Raphael's personality in the 1987 animated series deviates the most from all other incarnations. The show's theme song describes him as "cool but rude" (he takes a slice of pizza with his sai and shoves the rest of it onto the screen), as opposed to being angry and sullen as in other versions. Raphael is a sarcastic wise-guy with a smart-aleck quip for almost any situation, and supplies comic relief alongsideMichelangelo, whose humor is usually attributed to his ignorance and spaciness. As a result, Michelangelo is the subject of Raphael's jokes more than any other Turtle. He frequently makes jokes that break the fourth wall.

This incarnation of Raphael is entirely different from other variations and has a far less confrontational relationship with his friends and fellow Turtles. The most striking example with this is his lack of a rivalry with Leonardo. Raphael has no desire to steal anyone's thunder or become a leader; he's perfectly content providing the wittiest of the cartoon's jokes, being the most humorous turtle of the group. Despite this, he will still serve as Leonardo's foil from time to time; whenever Leonardo shouts a heroic line, Raphael would quickly add in a sarcastic retort. Whereas Leonardo would jump in to help people, Raphael would be more reluctant and if Leonardo's plan backfired he would challenge Leonardo to reconsider and re-evaluate the plan by saying "Now what, fearless leader" rather than saying this to steal Leonardo's role as leader. However, Raphael did challenge Leonardo's leadership once in season 8's "Turtle Trek", Raphael was closest to Michelangelo in this series, most apparent when he hesitated to attack a robot Michelangelo because of the uncanny resemblance.

In the Season 4 episode Raphael Knocks 'em Dead, Raphael was being a comedian for a comedy club while investigating, but he gets kidnapped and the Turtles later rescue him.

In the Season 4 episode Raphael Meets His Match, Raphael was paired off with a mysterious female mutant lizard named Mona Lisa, who in the eyes of some fans, might have been considered as a potential girlfriend for Raphael. Despite following the Turtles back toNew York City, Mona Lisa was never seen again. His Archie Comics counterpart had a girlfriend named Ninjara, who was generally regarded as Raphael's girlfriend.

In the season 5 episode Raphael Versus the Volcano, due to a malfunction in Donatello's Healthometer, Raphael was convinced that he soon was going to die and decided to end his life as a hero named the "Green Defender," saving people from dangers and stopping criminals when he thought he had nothing to lose. When the Healthometer malfunction was discovered, the other Turtles found his farewell note, and they tracked him down to tell him he wasn't going to die.

Raphael was voiced by Rob Paulsen throughout the series and for two episodes in Season 3, he was replaced by Thom Pinto in Episode "The Ninja Sword of Nowhere" and "The Turtle Terminator". And in the final season Raphael was voiced by Michael Gough. In Turtles Forever, Rob Paulsen did not reprise his role as Raphael due to it being too expensive based on the logistics of4Kids being in NYC and Paulsen residing elsewhere, and was replaced by Sebastian Arcelus. Throughout most of Season Seven, the early episodes and the Vacation Season, Raphael was voiced by Hal Rayle. One of his memorable lines was "A mind like a steel trap" which he says to April O'Neil in the very first episode "Turtle Tracks" and again in Turtles Forever to Hun.

He and the other members also make a brief cameo in Wormquake! and The Wrath of Tiger Claw. Unlike Turtles Forever, he and the other characters are voiced by their original voice actors. However in the polish version he's voiced by his 2012 self VA, Otar Saralidze. 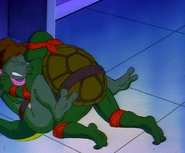 Add a photo to this gallery
Retrieved from "https://xianb.fandom.com/wiki/Raphael(1987)?oldid=289676"
Community content is available under CC-BY-SA unless otherwise noted.