Raven reappears in Teen Titans Go!, with Tara Strong reprising her role. While her appearance remains mostly unchanged from the original Teen Titans series, it is later shown that her short hair is now black with purple streaks instead of violet purple. Also, in the episode "Hey Pizza" her leotard is jokingly referred to as a 'bathing suit'. In "Legendary Sandwich", it is revealed that she loves the show Pretty Pretty Pegasus (a parody of My Little Pony, for which Strong voices Twilight Sparkle) but is afraid of any other girly thing (flowers, hearts, chocolates, and rabbits). It is confirmed as, like in the comics, Raven has romantic feelings for Beast Boy, however she keeps it as a secret from all the other Titans.

Raven's powers are magical in nature and are inherited from her demonic father, Trigon. They are controlled by her feelings and emotions, so she has to keep them under control. When using certain abilities, she has to say her incantation "Azarath, Metrion, Zinthos!" before casting them. In "Real Boy Adventures", it took her four days to list all the things she could do with her magic.

In "Starliar," the book briefly appeared in Raven's room before a hungry Silkie ate it and gained magical abilities as a result.

In "Meatball Party," Beast Boy snatches Raven's cloak, to tease her when she wasn't talking. He then takes out her spellbook to try and turn the couch into a burrito. After two failed attempts, resulting in Cyborg and Robin turning into a frog and a unicorn, he finally gets the spell right.

In "Más y Menos," at the start of the episode, Raven is seen reading her spellbook again when she scares Más and Menos off.

In "Halloween," Raven is briefly seen looking through her book to find a dark spell to summon the Halloween Spirit. 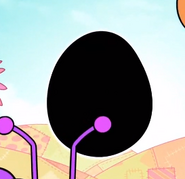 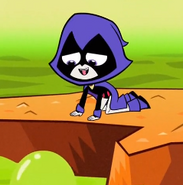 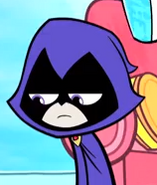 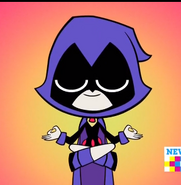