He is the Leader of the Cabal. According to Iron Man he is a Evil Mastermind.

Johann Shmidt is the leader of HYDRA, a sizable terrorist organization derived from the Third Reich. A Nazi during World War II, he was injected with a premature and incomplete variant of theSuper-Soldier formula. This early version of the serum initially granted him extraordinary strength and speed, and he assumed the alias of Red Skull.

Since then, he has come into conflict with Captain America for years, without ever achieving his goals of global domination. The imperfect Super-Soldier serum eventually began to deteriorate, slowly killing the Red Skull, and, in time, was subsequently assumed dead by many.

With his body becoming weaker, the Skull formulated a plan with an associate, M.O.D.O.K., to capture Captain America and transfer their minds.

The Red Skull took a number of HYDRA soldiers to engage Captain America at Ellis Island, using a specialized set of weapons to atomize the Captain behind his shield. Iron Man, who witnessed this, intervened and sprawled into an unexpected frenzy while the Skull mocked that he "had a heart after all." Red Skull, using the Captain's shield, and the assistance of the technopathic M.O.D.O.K. proved more then a match for the distraught and unfocused Iron Man. The two left via a portal to the Skull's base.

Red Skull worked with Justin Hammer as part of the Cabal. The latter was able to subdue the Avengers as Red Skull viewed from the monitor in his chest. Being asked by Justin how he was fairing, Red Skull remarked that his performance was impressive and cautioned him to not underestimate Captain America. Justin disregarded the warning, as he classified Captain America as old. Justin was defeated by Captain America and later tried to talk his way into why he should stay in the Cabal, reasoning the defeat as a minor set back. Though agreeing with him, Red Skull told him that his services would not be required. As Hammer tried to give further reasoning, Red Skull cut him off abruptly and acknowledged that his contribution was important, being that of the head of the Super-Adaptoid. Questioning and being confirmed by M.O.D.O.K. that he could indeed fix it, Red Skull told him that all it needed after its repairs would be a better pilot.

The rest of the Cabal finally forms, with Attuma joining in. They tried to destroy the Avengers, by using their own battle methods against them. They failed, but succeeded at one part of their plans----rescue Hyperion from S.H.I.E.L.D., and have him join the Cabal. Together, they attempted to kill Doom and steal the Tesseract, as of which they succeeded partially.

The Skull has found the Cosmic Cube and attempted to rule all dimensions, but ended up betraying the Cabal and being humiliated by the Avengers. He briefly became the Cosmic Skull, but lost his armor to M.O.D.O.C., and was flung to another dimension, where he met his true boss, Thanos.

The Red Skull betrayed Thanos and escaped back to Earth. However, he was followed by Thanos' droids, and crashed in Brazil. The Avengers investigated the scene, and found a mentally-unbalanced Red Skull with a Infinity Stone, which he had stolen from the Mad Titan. He was imprisoned by the Avengers to get more information about Thanos. When Black Widow and Hawkeye interrogated him, his only response to them was that "He [would] rise".[6] The rest of his Cabal members would break up as a result.[7]

The Avengers used the carvings the Red Skull made in his cell to locate the Time Stone. The arrival of said stone create temporal anomalies, like the appearance of dinosaurs, robots from the future, or Hydra battalions from WWII which wrecked havoc in Manhattan. In the middle of the chaos, the Red Skull escaped his cell, and tried to get the Time Stone, which had been attached to Tony Stark's arc reactor, and caused him to de-age.

One the Red Skull got hold of a kid Tony Stark, a pulse from the Time Stone barely de-aged the Skull, reverting his mind to a normal state. Captain America fought the Skull to save Tony, who soon managed to put on an adjusted Iron Man armor for his young body. Tony attacked the Skull with a repulsor ray which blasted the villain out of the tower, the Skull was then caught by one of the pterodactyls which had been brought to the present by the stone, defeating him, but ultimately messing up their chances of information on how to stop Thanos

The Red Skull was first seen leading his fellow villain allies, MODOK,Whiplash, and Venom into fighting several heroes (Iron Man, Spider-Man,Hulk, and Thor) until the heroes were accidently hit by Dr. Heinz Doofenshmirtz's powerful device called the "Power-Draininator." When Red Skull and his allies learn of Dr. Doofenshmirtz' device that drains the heroes' powers, they decide to seek him out, believing that his invention can be of good use for their own purposes. With help from Red Skull and the villains with him, Dr. Doofenshmirtz causes mayhem in Danville. Eventually, Doofenshmirtz reveals that his Power-Draininator was destroyed by his nemesis Agent Perry the Platypus after it drained the powers, much to Red Skull's anger; but Doofenshmritz manages to create a second and improved replica of the device, much to the Red Skull's delight. However, upon finally getting hold of the device, Red Skull betrays Doofenshmirtz by imprisoning him in a cage, believing him to have outlived his usefulness. It was then Red Skull reveals his true plans of using the Power-Drain-inator to destroy the Tri-State Area, before draining other superheroes of their powers so that he along with other villains can take over the world. Red Skull has MODOK to make several modifications to the Power-Drain-inator that will allow itself not only to drain any power from heroes, but also matter and living energy. With help from Phineas and Ferb, as well as from Perry, the heroes were able to regain their powers and defeat Red Skull and his villain allies, who are then arrested by S.H.I.E.L.D.

The Red Skull took an early prototype version of Dr. Abraham Erksine's Super Soldier Serum to gain enhanced abilities. But the formula also mutated his appearance turning his face into a red skull. He is also possesses an intellect and inventive genius.

It is possible that after his work with Thanos, Thanos may have rejuvenated the super-soldier serum in his system, thus explaining the fact that he no longer needs the Armor to sustain himself and him still possessing his enhanced abilities after his alignment with Thanos and having the Armor removed.

After the Time Stone de-aged Skull, his fighting skills and condition were enhanced. Enough to match Captain America in combat. 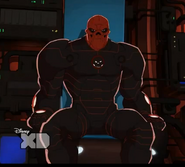