Start a Wiki
Rei Takashima was a former prison doctor at DW. She is a minor antagonist in Deadman Wonderland.

Takashima is first introduced after Tamaki collapses a tower on Ganta. Ganta goes to her office, where she fixes him up and tells him about the candy. She appears a second time when she analyzes Senji's X-rays.

However, when Senji loses his battle against Ganta Igarashi, she more than happily removes his right eye and gains pleasure doing so, therefore exposing her sadistic side.

Later on, when Minatsuki faced her penalty of losing an organ at random, she only had to lose some of her hair as it had been rigged by the members of Scar Chain; this caused Takashima to become furious.

She has been seen helping Tamaki with his plans on the Forgeries experiments on random Deadmen. She has also given Azami Midō her Snake Branch of Sin, making her a Forgery.

Near the end of the DW revolt arc, she is seen busy in her laboratorium and eventually killed by an unknown being (most likely the Wretched Egg). 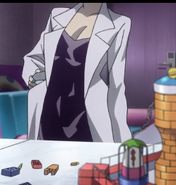 Add a photo to this gallery
Retrieved from "https://xianb.fandom.com/wiki/Rei_Takashima?oldid=209683"
Community content is available under CC-BY-SA unless otherwise noted.