Xianb Wiki
Register
Don't have an account?
Sign In
Advertisement
in: Rick and Morty Universe, Arson, Terrorist,
and 71 more

Not much is known about Rick's life before his current state seen in the show except for a few things that have been vaguely mentioned in the series. It has been mentioned multiple times that Rick has been absent from the family for at least fourteen years and it wasn't until one year before the events of "Something Ricked This Way Comes" when Rick finally returned to the Smith house on January 15th.[4] The reason for his absence is unknown to the rest of the family.

In the Pilot episode, Rick told Beth that he loved the eggs that she made him and that her mother would have loved them too if she were still there. In the episode Rick Potion #9, it is revealed that Rick has a very pessimistic worldview, informing Morty that love is "just a chemical reaction that compels animals to breed", advising him not to continue the cycle of love, marriage and heartbreak that he had to go through and that his parents would likely go through, encouraging him to direct his energy towards science. This could imply that the woman he married before is either divorced and/or deceased as of now. In the same episode, he and Morty leave their original dimension (Dimension C-137) in favour of the one they currently reside in.

In the episode Get Schwifty, it was revealed that when Rick was somewhere in his college years or in his 20's, he, Birdperson, and Squanchy were in a rock band called "The Flesh Curtains".

Rick is 60 years old and currently resides in his room in the Smith house. In the garage, he works on his inventions and scientific formulas and tests them out, traveling to other dimensions, building various robots and devices, and causing general mayhem in different parts of the universe

In the episode "The Wedding Squanchers", Rick willingly turned himself over to the Galactic Federation and was sent to one of their maximum security prisons. He currently resides there, with little chance of bail, parole or escape.

Rick is a genius scientist, capable of creating complex scientific inventions, including brain-enhancing helmets, dream-invading devices, portals to several different dimensions, and the world's first amusement park inside the body of a living human. His brilliance can be muddled by his jaded personal views and his alcoholic tendencies. Rick is easily bored and does not do well with routine. When his curse removing store in the episode Something Ricked This Way Comes started requiring real work, Rick simply lit the whole store on fire and abandoned it. He regularly goes to other dimensions to harvest resources and will often willingly kill aliens to get them. He is willing to be extremely brutal such as when people betray him or his life or those close to him are danger. He is usually portrayed as homicidal and having a large disregard for life, enough that he came close to bombing the world with neutrinos while drunk. He was shown to find killing fun during the Purge and was even willing to kill Morty's half-Gazorpian son due to the child's danger to everyone and unstable nature.

This does not make him completely heartless, however, as he has been shown to be shocked, startled or annoyed by loss of life that he deems unnecessary, foolish or unreasonable. He was annoyed at Morty for letting Fart live, resulting in a chase with local police that cost many bystanders their lives, and he was panicked when Unity destroyed an entire city that Rick thought still had people in it, since he was unsure if Summer and Morty were there or not. He also was shocked and upset by people he was close to dying or nearly dying, such as when Mr. Poopybutthole was shot and he ran to his side in fear for the latter's life. When Bird Person was killed by Tammy, Rick flew into a rage, mowing down multiple Federation troops. Rick gasped when seeing Jerry being shot several times and left mutilated. During the time of the Festival, he only watched the killing for a few short seconds before becoming overwhelmed by the violence and vomiting. Later, when helping Arthricia get revenge against the upper class, he felt he had done enough killing and began to find it gratuitous.

Rick has the tendency to be possessive and dominating of Morty, believing the boy to be his own personal helper. This doesn't prevent Rick from genuinely caring about Morty. He occasionally uses his own inventions to improve his grandson's life, such as invading the dreams of Mr. Goldenfold to help raise the boy's math grades (although raising Morty's grades would have the side benefit of preventing Morty's parents from removing Rick's helper)[5]Rick can also be protective of Morty, as shown in the episode "Meeseeks and Destroy", where he eventually sets aside his cynicism to allow Morty to have a positive adventure, and abruptly kills Mr. Jellybean as the two are leaving the fantasy world because of the previous attempted rape on Morty.[6] He even tried to sacrifice himself for Morty in A Rickle in Time and accepted death, that is until he saw a way out of dying. He cried when seeing pictures of Morty and remembering Morty as a newborn reaching out to him, when he was held captive by Evil Rick, causing Evil Rick to mock him and then for Rick to insult him back.

Rick and Morty have a strong bond, though their relationship is strained due to Rick's cynicism, alcoholism, lack of conventional morality, and his tendency to push aside other members of the Smith family. Rick clearly doesn't respect Jerry in any sense, and his relationship with Beth can be tumultuous at times. In "Raising Gazorpazorp"and "Something Ricked This Way Comes", Summer tags along on some of Rick's adventures. Though Rick initially had very little interest in her, the two have begun to develop a closer bond.

Rick has trouble taking orders from others, is very anti-totalitarian, and seems to dislike people with authority and government officials. He refuses to join the Council of Ricks because he views them as a government. He also calls the guards at Intergalactic Customs "robots" and claims that he doesn't respect them, as he deems them bureaucrats and doesn't like "being told where to go and what to do". Rick also has a great dislike of standardized education, claiming that school "isn't a place for smart people" and a "waste of time", and insists that things such as studying and homework are pointless and stupid.

Rick holds seemingly contradictory beliefs on religion, at one point telling Summer at the breakfast table in the pilot, "There is no God", yet in the "Anatomy Park" episode, he tells the family "Do you realize that Christ was born today? Jesus Christ our savior was born today-are you people even human? What kind of Christmas is this?" (although he was most likely sarcastic), quickly recognizing Mr. Needful as the Devil, and when he thinks he is going to die while one of the other sixty-three Ricks is chasing after Morty's lost collar, actually kneels and prays-"Please God, if there's a Hell, please be merciful to me" (significantly, when no one else can hear him). When the 1/64th Rick succeeds, he yells "Fuck you God, not today, bitch!" When the Ricks recombine in the presence of Summer and Morty, however, he once again says "I did it! There is no God! In your face!" It's possible this is just due to Rick's ego and his complete confidence in his own abilities.

Despite his general disregard for others, he is shown to harbor deep emotional pain and sorrow, especially when it comes to his romantic relationships, such as with his ex-wife and Unity. Not much is known about his marriage, but the absence of his wife is possibly a contributing factor to his current personality. Much more is known about his relationship with Unity. After freshening up during a long party with Unity's hive mind avatars, he returned to find Unity and all the planet's inhabitants gone, leaving behind a farewell note for Rick explaining that while Unity enjoyed its time with him, they could not be together, as they were too alike in the sense that they both turn others into mirror images of themselves, though in Rick's case, he does so through bad influence rather than assimilation.

Dejected, heartbroken, and alone, Rick returned home, where he was confronted by Beth over the basement lair and the escaped alien, and asked to keep no more alien pets. To Beth's (and the whole family's) shock, Rick simply conceded and retreated to the garage, where he clumsily attempted suicide with a makeshift death ray. He first killed a small, baby-like blob creature he kept, hoping to cure the space AIDS which the alien apparently suffered from. After Beth and Jerry let Blim Blam escape, Rick lost his chance to find the cure, hence his decision to euthanize the small alien. He thawed it out with a serum, comfortingly petting it as it cried out and screamed. He turned it to ash with the death ray before he sat down under it as it was about to fire again, only to pass out at the last moment while the death ray overloaded and fried. He remained slumped over his workbench, passed out, for the majority of the day and night. Rick and Morty then visited Beta 7's world, where Unity is staying. Rick demanded to see Unity, but Beta 7 informs Rick he is considered a "hostile entity" and threatened to attack the two unless they left, which Rick reluctantly did at Morty's urging.

Originally, Rick's consumption of alcohol is presented more from a comedic viewpoint throughout the series' run, but in the Season 1 finale "Ricksy Business", Bird Person claims that Rick is in "great pain" (citing his catchphrase "wubba lubba dub dub" as meaning "I am in great pain. Please help me." in Bird Person's language), and that he uses drugs and alcohol to numb himself. This is most likely due to his genius intelligence, and the traumatizing effect that his continuous adventures may have on him, in the past and present (in "Rick Potion No. 9", Rick explains that the best method on how to deal with horrible events and outcomes is to "not think about it").

Throughout his numerous adventures with Morty, Rick has been shown to be ready and willing to disregard rules, laws and social norms if it is necessary to complete a task or escape a dangerous situation. Season one has Rick resorting to assault, battery, vandalism, smuggling, corruption of a minor, home invasion, reckless endangerment, terrorist threats, indecent exposure and even murder and arson in order to get the job done. The most common crimes committed are driving (or flying) under the influence, drug abuse, and public intoxication.

In "The Wedding Squanchers," Rick is arrested by the Galactic Federation. His full criminal record is displayed on a monitor. Although in an alien language and unreadable, it is shown to be quite long. After he is placed under maximum security, another prisoner asks him "What are you in for?", to which Rick responds simply with "Everything" 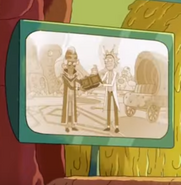