Rin Nohara (のはらリン, Nohara Rin) was a chūnin of the Hidden Leaf Village and a member of Team Minato.

On the day of their entrance into the Academy, Rin was present when Obito Uchiha arrived when the ceremony had ended, which left him dismayed. Rin, however, handed Obito his entrance documents, which he was very thankful for.[3] Rin was also the first to congratulate Kakashi after he'd graduated from the academy a year ahead of the rest of his class, Kakashi having gotten his own Forehead Protector after successfully performing the Clone Jutsu. After graduating the academy a few years later, Rin was placed under the jōnin tutelage of Minato Namikaze, alongside Obito and Kakashi Hatake. For their final test to become genin, Minato tasked his potential students with taking one of two bells from him in actual combat. While initially, the team attacked Minato independently, easily being out manoeuvred by the older ninja, Kakashi convinced Rin and Obito to work with him, ultimately earning Minato's approval to become his students as they passed the real test: showing team-work.

During the team's training sessions, Minato's wife Kushina Uzumaki would regularly join them to help their training. Rin took an especially delight in her visits, greatly liking the food Kushina would make for them, to which Kushina grew very attached to the girl. When Minato's students partook in the Chūnin Exams, Rin and Kakashi stood outside the gates of the Forest of Death waiting on Obito to arrive. While in the forest, they were confronted by Guy, Genma and Ebisu. Before they could attack as a team, though, she was shocked to see Obito move to attack, but before Obito could do anything, he was knocked down by Guy. She later dressed his wounds and spoke to Obito who professed his pride in his clan, and his dream to be Hokage. She later watched with bated anticipation and cheered as Kakashi fought Guy during the third round of the exams with Kakashi defeating Guy. After Kakashi became a jōnin, Rin would concoct a top secret celebration for him much to Obito's dismay due to the fact that Obito had hoped to use the moment to presumably tell Rin that he loved her.

As a medical-nin, Rin's primary duty on missions was to give support to her team-mates which she did with great aptitude and was even able to teach her team-mates basic first aid. Despite her age, she displayed great skill with medical ninjutsu, able being chosen to for a high-ranking mission in the Third Shinobi World War. During which, she successfully implant Obito's left Sharingan into Kakashi's damage eye socket in a short period of time and with only basic medical tools given the dire circumstances the team was in at the time. 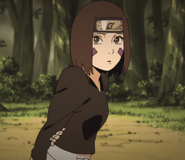 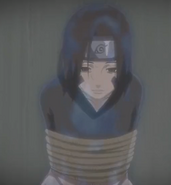 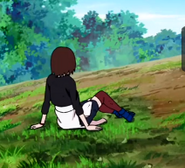 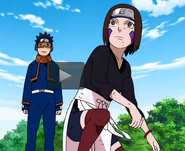 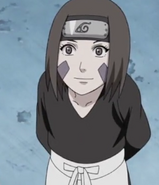 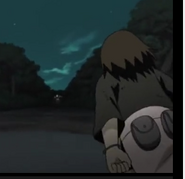 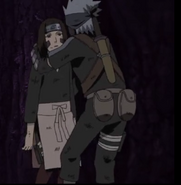