Speedwagon is a friend and ally to the Joestar Family. Although he is an ordinary human, he faithfully supports them during his life and even after his passing via his organization, the Speedwagon Foundation. 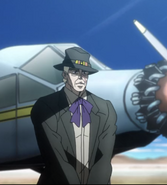