A member of the X-Men.

Rogue appeared in the X-Men television series, where she was one of the main characters. In this series, she had her absorption powers, Ms. Marvel powers, and a copy of Ms. Marvel's psyche trapped inside her own. She is somewhat liberal in her use of her powers, but it is sometimes shown how the psyches affect her mind, such as when she absorbed the powers/minds of particularly dark or evil characters, like Archangel while he was a Horseman or the Juggernaut.

Rogue has a relationship with Gambit throughout most of the series, similar to the comics, even referring to herself as Mrs. LeBeau in "Hidden Agenda". However, Rogue also displays a more flirtatious attitude towards numerous other characters, such as Cyclops,Archangel, Colossus, and during the X-Men's appearance on Spider-Man: The Animated Series, she flirted with Spider-Man.

During the series, Rogue is one of the characters affected by the news of the 'cure', which Apocalypse and Mystique used to make mutants into slaves. She is also revisited by Cody, her first boyfriend, and almost runs away with him. However, Rogue discovers that he was part of a plot for her to become the new ruler of the Brood, or "the Colony". Rogue was voiced by Lenore Zann. This particular version of Rogue also appeared in the Animated Series' two tie in comics: X-Men Adventures and The Adventures of the X-Men, with the former being based on the animated series and the latter including the same characters but with original storylines. Rogue appeared to be a regular in the first three volumes of this series, but appeared only in the final issue of The Adventures of the X-Men.

If I touched anyone I absorbed there Strength right into me. 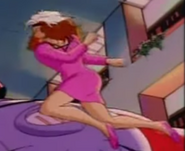 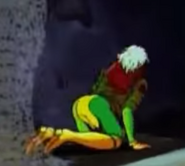 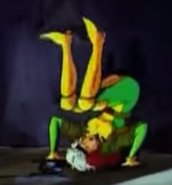 Add a photo to this gallery
Retrieved from "https://xianb.fandom.com/wiki/Rogue?oldid=210919"
Community content is available under CC-BY-SA unless otherwise noted.