Rosarita "Roberta" Cisneros is a maid who worked for four years at the Lovelace household in Venezuela.

Although her domestic skills such as cleaning and cooking were poor, Roberta developed a close friendship with the young son of the Lovelace family, Garcia. She was once known as Rosarita Cisneros, a former F.A.R.C guerrilla trained as an assassin in Cuba and an internationally wanted criminal. Balalaika refers her as a "hardcore terrorist" to the point that Hotel Moscow had to deploy all their commandos as well as Balalaika getting involved in the situation personally should things get out of hand. Revy refers to her as "That Fucking Glasses Bitch". She earned the moniker "Bloodhound of Florencia" for her relentless drive to achieve her objectives. Her tormented past and the smell of blood, gunpowder and muck like that of a sewer rat emanating from her was something Revy understood fully well.

In combat, Roberta is a truly fearsome opponent and has quite a powerful body. Her strength, speed, endurance, and instincts have been honed to almost supernatural levels, so much so that Rock at one point refers to her sardonically as "a killer robot from the future" (a reference to James Cameron's Terminator movies), and she has extensive training in a wide variety of tracking, stealth, and combat skills, including martial arts and a very high degree of proficiency in the use of a wide variety of weapons. Among the weapons she has used is a Barrett M82A1 anti-material sniper rifle with a grenade launcher mounted underneath the barrel, which she could fire one-handed despite the weapon's size and significant weight - a testament to both her skill and tremendous physical strength. She has also used a combat knife, a SPAS-12 shotgun disguised as an umbrella, machine gun, grenade launcher hidden in a suitcase, spiked brass knuckles, trench spike, and twin Sistema Colt Model 1927s (see Colt M1911 pistols), in manga she's using IMBEL M1911 developed by Indústria de Material Bélico do Brasil, based on Colt M-1911A1 as well as an antique possibly spanish 18th century flintlock rifle that once belonged to the Lovelace family.

It is ironic that while Roberta is one of the most powerful warrior-women, if not the most dangerous, in Black Lagoon, she is also one of the more humane. She is unwaveringly devoted to her master and dotes on his son, Garcia, whom she loves deeply. Roberta and Revy fight each other, but only to beat themselves up. Rock interferes, but Roberta and Revy tell him to stay out of it. In the manga and anime, the fight ends in a draw right after they punch each other out simultaneously, (though Garcia claims she won because she remained conscious). Her kindness can easily change as seen in a humorous omake in Volume 1 of the manga when Garcia flipped her skirt up, groped and slapped her butt in a playful manner, which prompted her to pinch his arm and lift him up off the ground by the skin of his arm as punishment until he apologized, showing that her patience has a limit before losing her temper. It's also revealed during her brawl with Revy that she is not above of cursing as both she and Revy told Rock in unison to "STAY THE FUCK OUT OF THIS!". There are a few hints that, despite her bloody past, she may be religious, unlike many of the other main characters in Black Lagoon, specifically Catholic judging from the large crucifix she wears around her neck and her constant prayers during her revenge.

She admitted that she did murder children, women, or anyone in name of revolution during her F.A.R.C years. Disillusioned by the fact that she was merely a tool for the drug cartels in cahoots with F.A.R.C, she opted out and joined the Lovelace clan as a maid through her father who was a close friend of Diego Lovelace. Despite being asked by Garcia not to pick up gunfighting anymore, later events in the manga, which depicts her watching helplessly as a bomb was set killing many including Diego. Garcia's question of why was his father was a victim makes her go into battle again, seeking revenge. Roberta also shows signs of a growing anger; she is shown taking mouthfuls of stimulant drugs, and experiencing haunting hallucinations in the form of her past victims, most notably a Japanese man. It is revealed that she tore his family picture before ruthlessly shooting him in the forehead. She once again stalks the city of Roanapur in search of the one responsible for assassinating her master. Unfortunately, it turns out to be the US Special Forces, who's intentions were to assassinate a general and had to sacrifice Diego Lovelace to complete their mission. Roberta's quest for vengeance has put many of the residents including Hotel Moscow, the Triad, and the Colombian Cartel on high alert as it could mean the end for all of them if their new enemy is the United States. Most of the residents blame the Lagoon Company for attracting her back to Roanapur despite the fact the group was in the dark about the situation and brushed it off as if it were an Elvis sighting. Further into her quest, she begins to lose sight of her goal, almost returning to her former persona to the point she begins to lose her sanity and has trouble identifying friend and foe, thus almost harming Garcia in the process. The F.A.R.C commander even comment that she is no longer the hound they once knew, but a stray wolf. Her oath as the "Bloodhound of Florencia" is "For I vow upon the name of Santa Maria, to strike down upon any and all unrighteousness." (this is from Vol. 1.), and also there is this version seen in the Vol 6. "I vow in the name of Santa Maria. An iron hammer to all the unrighteous"

In Chapter 73, Roberta is last seen with an American woman, presumably Eda. The woman is able to subdue Roberta and give her a location where Gray Fox is, so whether she is Eda or not, she is definitely an American security agent. She finally catches up with Grey Fox and kill 8-9 soldiers (there were 18 soldiers in 3 groups, Alpha, Bravo and Charlie) minus Caxton who is thought to be killed by Garcia (however, it was later revealed that he faked his own death by using fake bullets) in order to stop her path of revenge, and Ray (manga) who is killed by Caxton when tried to kill Roberta after she pull herself together.

In added pages of 76 chapter Vol. 9, when Roberta was shot by Garcia with fake bullets, she accidentally shot Garcia, wounding him (bullet grazed through his liver), Garcia smiles and kiss her on the lips (which caused her to blush). Roberta, Fabiola and Garcia came out of the situation alive and well. There is also scene where Fabiola greet killed Japanese engineer family in visit to Lovelace mansion, and nervous Roberta and Garcia standing side by side.

Considering from Garcia and Roberta's intimate moment, it is likely Roberta may have had intimate romantic feelings for her young master (regardless of the age gap) as when he kissed her on the lips she actually blushed instead of being disturbed, and it could be Garcia's love for Roberta may have evolved into a more sexual one as he grew older, though it cannot be said if this has resulted in them developing a sexual relationship with each other.

In the anime OVAs, it is shown that Roberta, Fabiola and Garcia came out of the situation alive and well in the end. However, Roberta has lost her right leg, left arm (for some reasons unknown, possibly due to infection, which happened all of a sudden), point and middle finger of the right hand and right eye. She is shown alongside Garcia meeting up with Shane, Fabiola, and the Japanese engineer family. 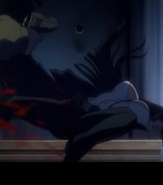 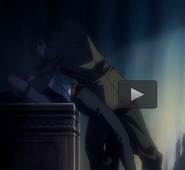 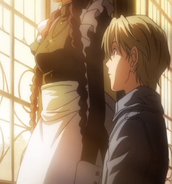