Ruka (瑠架, Ruka) is a demon member of the Dark Tournament committee. Her name means bright blue flower, but is also a Spanish slang word for Gangster chick.

She is voiced by Chiharu Suzuka in the Japanese version and Laurie Steele in the English dub.

Ruka is initially portrayed as manipulative as she had tricked Genkai and Hiei into a barrier to keep them imprisoned while her employers fight their teammates, showing she is willing to do anything to win the match. Though she initially seemed arrogant and mocking towards her victims, telling them there was no way of escape, when it was revealed that Hiei would easily destroy her barrier along with her existence, she revealed her true cowardly nature and began to fear for her life as she could no longer contain them. In the manga epilogue, it appeared that she had reformed her ways and became a better person, enough to win a cult of supporters, along with Juri and Koto, and develops a crush on Jin. This is also shown in an ad in Eizou Hakusho.

Ruka, is a member of the Dark Tournament committee. She pretends to be a nurse to keep Team Urameshi from winning their fight with Team Masho.

She was to keep Hiei and the Masked Fighter occupied during the fight between Team Urameshi and Team Masho, with her barrier. In the anime, Koenma and Yusuke had a crush on her until they realized she was evil. Strangely, her barrier had a mysterious healing effect on Hiei's arm (in the manga it healed naturally). She remained confident that her powers would keep Hiei at bay, but when she saw that his powers were slowly returning, she became fearful for her life. After Yusuke's disqualification, Hiei was about to destroy her along with her barrier, but he stopped once he realized Kuwabara stepped in to fight (even though he could barely stand (Kuwabara won against Risho when he saw Yukina). She was relieved that her life was spared.

In the English dub before the fight, Kuwabara admits that Ruka told him that though Hiei and the Masked Fighter were out of the fight, he was still fine.

Little is seen of her again in the anime, but she pops up in the manga epilogue as part of a trio of cult favorites including herself, Juri and Koto. In a Human World television interview, she admits to having a crush on Jin.

Butajiri: Ruka seems more closely affiliated to Butajiri, the sponsor of Team Masho, than the team itself. It's very likely that he bought Ruka's services for that round, as her skills are very non ninja-like.

Jin: Ruka has a hidden crush on Jin, because of his bubbly personality, though she describes him as the type to hang out with other men than pay attention to a woman. 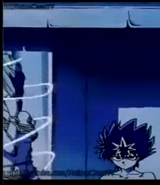