Kaelynn Alexander
The Sam Alexander incarnation of Nova appears in Ultimate Spider-Man, voiced by Logan Miller. This version has no family and is the last of the Nova Corps, due to former member Titus wiping the rest out trying to get another helmet. He was trained by Rocket Raccoon and joined as a member of the Guardians of the Galaxy (Star-Lord,Gamora, Drax the Destroyer, and Groot). He left the team for Earth and joined a team of S.H.I.E.L.D. Trainees consisting of Power Man, Iron Fist, White Tiger and Spider-Man. He serves as Spider-Man's friendly rival on the team. In the third season, he unlocks his full power as Nova Prime.

He wears a Centurion Nova Corps costume which comes with a gold helmet that covers the upper part of the face, with a big red star on the front and white eyes. He wears a black suit, with golden buttons on the suit with glovern. In Season 3, after unlocking all of his powers, he now appears more like his man stream counterpart with a black helmet.

The hyperactive loose cannon of the team, he is far more enthusiastic and immature than Spider-Man, Sam’s eagerness can be a blessing and a curse for him and the rest of his team. His personality constantly clashes with Spider-man’s as they compete for both bragging rights, and the right to lead the team. Nova doesn't know the true limits of his powers. Like his rival Spider-Man and his mainstream counterpart Richard Rider, He always feels that he has something to prove and is very cocky. Sam, despite being boastful and sarcastic, has leporiphobia, the fear of rabbits. His massive ego causes him to be the bane of all of his teammates, especially during battles. He spends most of his time during fights trying to show off how cool he is, clicking photos on his mobile, rather than actually helping his teammates to win the fight. On very few occasions, he is shown to know the difference between a joke and something serious. 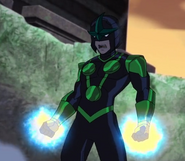