Xianb Wiki
Register
Don't have an account?
Sign In
Advertisement
in: Dimension Travelers, Department of Research and Development, Tacticians,
and 32 more

Following a fight with Blastaar, the Agents of S.M.A.S.H. work with Iron Man when Leader hijacks the Hulkbuster armors.

A-Bomb's birthday calls for a celebratory game of mini-golf. Thanks to the Leader, it's the Agents of S.M.A.S.H. who are miniaturized by a shrink ray. Now the one-inch heroes must stop the towering Leader before he can easily destroy them.

Hulk begrudgingly teams up with Thing to take the fight to the Leader's doorstep when his archenemy puts the lives of the Agents of S.M.A.S.H. on the line.

The Hulks have crashed their Jump Jet more times than they can count, and it is out for revenge now that the Leader has given it artificial intelligence.

While looking for a way back to Earth, the Hulks discover the Leader stowed away on board the ship. Retribution must wait as the Agents of S.M.A.S.H. have to fight Ronan the Accuser and his Kree soldiers to save an old foe: Ego the Living Planet. But when Galactus comes to consume Ego the Living Planet, the Agents of S.M.A.S.H. must put themselves at risk to save the lives of their two enemies.

After Leader tricks Skaar into entering a temporal displacement wormhole to Earth, the Hulks return to Earth a thousand years in the future only to discover that the High Evolutionary has turned all humans into Animal Men. The Earth got that way when a gamma meteor struck Earth a few months after the Hulks had left it. The High Evolutionary evolves Hulk to serve him and devolves A-Bomb, Red Hulk, and She-Hulk too. Skaar is unaffected and steps up to save the team and all of mankind.

The Agents of S.M.A.S.H. returns to Earth with Leader still in their possession even though they were blamed for the destruction of Vista Verde following the incident by Leader's Agents of C.R.A.S.H. They find Vista Verde under the rule of Abomination (who was pardoned and reinstated into the U.S. Army as a general) upon learning this from Mayor Stan and finding Hulkbusters that are under his command. Now the Agents of S.M.A.S.H. must liberate Vista Verde and defeat Abomination before he can use one of Thunderbolt Ross' old weapons in his plan to attack other nations.

While being pursued by the military, the Agents of S.M.A.S.H. go after Leader when he steals all the confiscated weapons from their vault. When Devil Dinosaur is enlarged and let loose by Leader, the Agents of S.M.A.S.H. team up with Spider-Man to stop Devil Dinosaur and restore him to normal size while having to deal with Abomination and the Hulkbusters.

Upon S.H.I.E.L.D. exonerating them from the frame-up in Vista Verde caused by the Agents of C.R.A.S.H., the Agents of S.M.A.S.H. track the Leader to his hideout on the Isle of Lucee. They get stuck in a deadly maze (which Leader improved on Thunderbolt Ross' plans in his earlier fight with Hulk) where Hulk's rage is drained from him, making him mellowed out. After the rest of his teammates are captured, Hulk finds them in Leader's clutches at the center of the maze where Leader uses his machine to manifest Hulk's dark side in the physical form of Dark Hulk.

Leader has escaped from the S.H.I.E.L.D. Tri-Carrier and has broken into the Latverian Embassy to steal one of the time belts to go back in time. Hulk chases Leader back to the Mesozoic and Hulk battles Leader and his mind-controlled dinosaurs while befriending a young Devil Dinosaur. Back in the present, the rest of the Agents of S.M.A.S.H. experience a timeline where intelligent dinosaurs exist and they work with El Diablo (an intelligent version of Devil Dinosaur) and Spider-Raptor to save Moon-Boy and the primitive humans from being exterminated by King Sauron's forces. 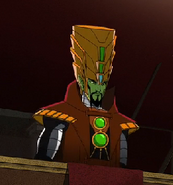