A member of the Avengers.

Sam Wilson served as a member of S.H.I.E.L.D. and often trained. However, during one of his training sessions where he was scolded so viciously by Nick Fury, he received the Avengers Protocol from Iron Man. After being asked by Nick Fury where he was going, Sam told him that he was heading into the big leagues. However, Fury questioned what could be more bigger than S.H.I.E.L.D. as he left. Upon entering Stark Tower, Sam was greeted by J.A.R.V.I.S., whom he expressed his interest in becoming a member of the Avengers to. Though JARVIS told him that Iron Man had suggested that he wear the War Machine armor, Sam insisted on wearing the Red-Wing suit. In the meantime, the other responders of the Avengers Protocol went with Iron Man to fight Red Skull at the Artic Base. Sam learned of their location and made his way to it, being that of the arctic.

He met up with the other Avengers after taking down agents of HYDRA and soon found himself on the receiving end of suspicion from Hawkeye. After having his name cleared by Black Widow, he joined the Avengers in aiding Iron Man and Captain America, the latter having had his mind placed in Red Skull's body and fighting his enemy in his own. After successfully taking down Red Skull and having the latter placed in the machine he used to switch bodies with Captain America, Falcon was given the permission of Captain America to switch their bodies back and soon thanked by him. After M.O.D.O.K. woke up from his unconsciousness and attacked Iron Man, Falcon participated in trying to get through the force field with the other Avengers as M.O.D.O.K. removed Iron Man's armor and arc-reactor, placing it on Red Skull and causing the latter to dub himself the Iron Skull.

The Project Redwing, or The Falcon Armor is the project which created an experimental aerodynamic suit of nanomesh armor utilized by Falcon.

When Sam Wilson got Stark's message, he proceeded to the armory where J.A.R.V.I.S. suggests him to the War Machine armor but he refuses, preferring to use the experimental armor instead. 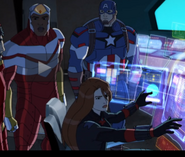 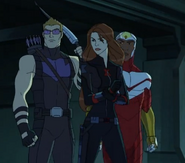 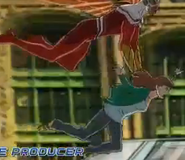 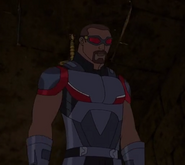 Add a photo to this gallery
Retrieved from "https://xianb.fandom.com/wiki/Samuel_Wilson_(Falcon)_(Earth-TRN123)?oldid=320406"
Community content is available under CC-BY-SA unless otherwise noted.