Sarada Uchiha (うちはサラダ, Uchiha Sarada) is a kunoichi from Konohagakure's Uchiha clan. Because she grew up without having her father around, Sarada initially struggles to understand who she is or what she's supposed to be. After meeting him with the help of Naruto Uzumaki, Sarada learns that she is defined by the connections she has with others, and as a member of Team Konohamaru, she seeks to someday become Hokage so that she can connect with as many people as possible.

Sarada is the only child of Sakura and Sasuke Uchiha. She was born while Sakura accompanied Sasuke on his travels, and was delivered with the help of Karin in one of Orochimaru's hideouts;[2] as such, there is no record of her birth at the Konoha Hospital.[3] As a way to keep a connection with Sasuke, despite being happy for him, Karin kept Sarada's umbilical cord. After that, the family returned to Konoha to raise Sarada, where the two helped her learn to walk.[4]During her father's absence from the village while gathering information on Kaguya Ōtsutsuki, she became ill with a high fever and afterwards began wearing glasses, which unknown to her were a gift from Karin.[5] Due to the importance of the mission, her father wasn't around much, and it is because of this that she did not know anything about him, including what he physically looked like as an adult.

Sakura did her best to comfort Sarada during Sasuke's absence, assuring her that her father loved her and that, when he completed his important mission, he'd come home. When this conversation went on for too long, Sakura poked Sarada's forehead and promised to continue it some other time.[6] As Sarada's parents continued to stay close to their own childhood friends, she ultimately got to know the kids of her parents' respective friends very well.[7] On the day of Naruto's inauguration as the Seventh Hokage, she watched the ceremony beside her mother and Chocho Akimichi.[8] 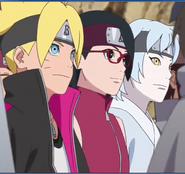 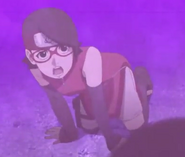 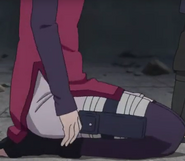 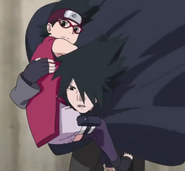 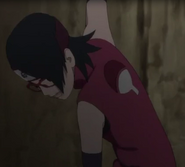 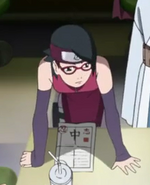 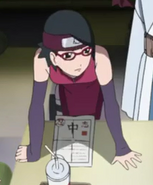