A member of the Fuma Clan.

Sasame hails from the Fuuma Clan of the Rice Field Country. Years previously Orochimaru came to the country to establish Hidden Sound. The clan had been in rough times since a previous war with a neighboring country. Many of the Fuuma Clan shinobi thus decided to volunteer and join Orochimaru's new army on the promise he could make their clan powerful once again. Sasame's cousin Arashi joined Orochimaru's cause. Years later her worry for her cousin prompted her to make a deal with Orochimaru's men so she could see him once again.

Sasame made a deal with former clan members Jigumo, Kamakiri and Kagerou to exchange the drugged bodies of Jiraiya, Naruto and Sakura for a chance to see her cousin Arashi. Naruto and his team were in the Rice Field Country searching for Hidden Sound's location. Sasame attacked the ninja on their first meeting when she thought they were ninja from Hidden Sound. She fled shortly thereafter and met her former clan members. They made a deal that if she could provide the three ninja to Orochimaru; they would let her see Arashi.

Sasame complied and returned to Naruto's group, explaining the misunderstanding before. She told them of her cousin’s plight and they pledged to help her. When the group stopped for a meal, she drugged their drinks so they would pass out. Her three clan mates then arrived. She was told they weren't actually just going to take them for interrogation; rather they were going to take their heads to Orochimaru to gain his favor. Sasame was shocked at this and tried to stop them. She was knocked away but saved by a fine Naruto. All three had not actually ingested the drugged tea and avoided being knocked out. Naruto and his team managed to defeat the three attackers and then they continued on their way to Hidden Sound.

Sasame remained outside as the three ninja entered Orochimaru's base. Her eagerness to see Arashi again drove her to enter the base by herself later. This was fortunate, because she saved an almost drowned Naruto. The group continued on further into the base and finally met Arashi. However what was revealed was too horrible for Sasame to believe. Arashi was made into an evil puppet beast due to Orochimaru's work. In this form, portions of Jigumo's and Kamakiri's dead bodies emerged to assist Arashi.

Naruto attempted to fight the beast but he became imprisoned by Arashi's jutsu. Sasame pleaded for Arashi to stop and pierced the Jigumo portion with a kunai, causing it to melt away. Arashi was then able to gain some of his identity back and asked Sasame to kill him. Hearing this, the Kamakiri portion exercised its control and Arashi reverted back to his beast mentality. Sasame managed to break the hold Arashi had on Naruto's prison, which gave Naruto enough space to stretch and break its grip on him. The prison breaking caused a massive explosion, damaging much of the surrounded underground structure. A piece of debris hit the Kamakiri portion and removed it and Arashi returned to his normal form. As he and Sasame were blasted through the air, he turned to protect her, taking critical hits in the process.

Arashi told Sasame that she managed to save him. Jiraiya arrived to rescue his team with his huge food cart destroyer toad. Arashi tossed an unconscious Sasame to Jiraiya, and he chose to remain behind with the still functioning Kamakiri and Jigumo masses. The frog with the group on top, jumped away to safety, and as the rubble enveloped Arashi. The group returned to the village, and Sasame pledged her best to return the clan to greatness. She stated Arashi inspired her to live on and do her best for her clan. She thanked Naruto and his team, thankfully for all they did for their clan. 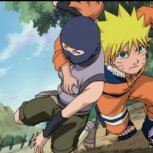 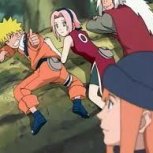 Add a photo to this gallery
Retrieved from "https://xianb.fandom.com/wiki/Sasame_Fuma?oldid=236088"
Community content is available under CC-BY-SA unless otherwise noted.