A British agent jumps out of a cable car, and the woman next to him tells her henchmen to follow him. After the agent kills one of them and prepares to shoot another, Agent Stan arrives to assist him. Stan blows up the henchmen, which creates an avalanche, causing the two agents to fall over a cliff. They open their parachutes, though the British agent and his parachute is crushed by Stan's falling snowmobile.

Stan's boss, B (Bullock), assigns Stan to infiltrate a movie set produced by Tchochkie Schmear (Klaus). Stan travels to Tunisia to investigate one of Tchochkie's movies, Bark of the Covenant. There, he finds Matthew McConaughey working on the set, only to find out he is a robot when Stan exposes him to milk. He also discovers that Schmear had been hired by Tearjerker (Roger). Suspicious, Stan arrives at a Monte Carlo casino, where he is introduced to Sexpun T'Come (Francine) and Tearjerker himself. Stan challenges Tearjerker to play a game in exchange for an invitation to an exclusive spa in the Teardrop Islands. Since he does not know how to play Baccarat or Craps, which are Tearjerker's expertise, Stan declares playing "highest number", in which the players name the highest number they can think of. Stan wins the game and leaves with an invitation to the spa. In the meantime, Sexpun gives Tearjerker Stan's wallet, containing his personal CIA information.

On his way to Tearjerker's island, Stan meets Johnny Depp, who is later replaced by a robot replica that, like the McConaughey robot, malfunctions when given milk. Tearjerker orders Sexpun to seduce Stan, but when she approaches him, he proposes marriage to her, and she falls in love with him as well. Meanwhile, Tearjerker plans to use his masterpiece tragedy film, Oscar Gold, depicting a mentally retarded alcoholic Jewish boy and his cancer-ridden puppy during The Holocaust, to make the moviegoers literally cry themselves to death. Stan and Sexpun embark on a boat tour, which ends in Tearjerker's office room, where Tearjerker ties the two to a chair with ropes and forces them to watch his film, which simultaneously premieres in cinemas throughout the world. With everyone on the verge of crying to death, Sexpun accepts Stan's proposal of marriage. Stan suddenly recalls the engagement ring given to him by S (Steve). He asks her to put it on, and Sexpun does so, which causes her breasts to swell, breaking the ropes. Discovering Adrien Brody and Halle Berry in Tearjerker's dungeon below the floor, Stan records a video of their celebrity baby, posts it on the internet, and makes a mass phone call, redirecting the moviegoers' attention from the film to the video. Furious, Tearjerker unleashes his soldiers to kill Stan, though instead they end up plummeting through the poorly constructed floor to the bottom. Tearjerker attempts to flee in an escape pod in order to create an even sadder film (6 hours of a baby chimp trying to revive its dead mother). Shortly into the air though, his pod malfunctions and falls into a volcano. After Stan and Sexpun are married, Tearjerker's hand rises from the lava pit briefly, but then falls back in. 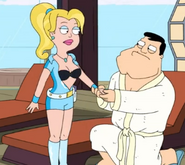