Hawkgirl appears in the animated series Justice League and Justice League Unlimited, voiced by María Canals Barrera. She is based on Shayera Hol, the Silver Age version of the character. Her personality was completely redesigned for the series by the producers, who wanted a second female superhero for the team to contrast with Wonder Woman. While Black Canary is traditionally more associated with the Justice League, the producers preferred to have the Hawk family represented. In the animated continuity, Hawkgirl's wings are organic and she wields an Nth metal mace which disrupts magical forces and other forms of energy.

In "Secret Origins," the Martian Manhunter gathers the future League to battle against an alien invasion on Earth. After the defeat of the invasion, the seven remained a team and officially formed the Justice League, dedicated to the defense of Earth against attack both within and without. To the rest of the League, Shayera was a mysterious woman with angelic wings from another world. She explained that she found herself on Earth when, while pursuing some criminals who were trafficking in forbidden technology, she was accidentally transported by the rays of a dimensional transporter known to her people as a Zeta Beam, which has been traditionally associated with DC's science fiction hero Adam Strange.

Throughout the series, she slowly builds a relationship with Green Lantern (John Stewart) while Wonder Woman has a relationship with Batman. In the two-part episode "Wild Cards," John is nearly killed by a bomb the Joker has set off while protecting Shayera. She just barely manages to bring him back to life by shocking him with her mace, then leaves the city to treat him. Later, in the Watchtower, John and Shayera show their true feelings for each other, and Shayera allows John to remove her mask, giving the viewer their first look at Hawkgirl's face beneath the mask, and the two shared a kiss.

In the second-season finale "Starcrossed," Shayera reveals herself to be a military officer of her planet's armed forces, working as an advance scout on Earth. When her people suddenly arrive in force on Earth, she works to help the Thanagarians gain the support of Earth's leaders to protect it from the Thanagarians' mortal enemies, the Gordanians. She is also reunited with her commanding officer and fiance Hro Talak (an anagram for the name of the Silver Age Hawkman Katar Hol), with both her now-revealed spy mission and this unmentioned romance creating considerable friction between herself and John. Information she has given to the Thanagarians enables them to take the League prisoner, though Shayera says they should not be killed. They later escape.

Unbeknownst to Shayera, the Thanagarians' true intent is to transform Earth into the final link in a hyperspace bypass, which will destroy Earth but allow the Thanagarians to strike a mortal blow at the Gordanians' home world. When Shayera learns of this plan, she betrays her people and informs the Justice League of the Thanagarian plot, proving this by returning John's ring which the Thanagarians had taken. The Thanagarian forces are eventually defeated by the League and forced to leave Earth, with Shayera left behind as a traitor. (For this reason, Shayera is later ambushed by a band of rogue Thanagarian resistance fighters seeking revenge in "Hunter's Moon.") The other six members of the League take a vote on whether to allow Shayera to stay on the team, but before they can tell her the result, she resigns from the League and departs (in "Wake the Dead", it is revealed that the decision, while split, was in favor of letting her stay, with John abstaining and Superman breaking the tie). She eventually comes to reside with Doctor Fate and his wife Inza in Fate's tower stronghold in an effort to decide what to do with her life.

In the episode "Wake the Dead", Solomon Grundy's corpse is reanimated, and he wreaks havoc. Shayera takes the responsibility of killing Grundy, whom she once considered to be a friend. After this, she returns to the League, but it is some time before she is properly re-accepted among its members, particularly Wonder Woman and Batman. After she is allowed to rejoin the Justice League, Shayera reclaims her seat among the seven founding members and opts to dress in simple civilian clothing as opposed to her previous, more militaristic costume.

The show ends with Shayera and Green Lantern (who is by this point in a relationship with League member Vixen) having resolved to be friends for the time being. Series creator Bruce Timm said in an interview that while he was deliberately ambiguous about the future of their relationship and understood while some fans disliked where it was left at the series finale, it was his opinion that "You can put two and two together and imagine what happens," especially since Green Lantern has at this point met his future son, Warhawk (Rex Stewart) who indicates that his mother is Shayera. A resolution to this storyline occurs in the fifth issue of the Batman Beyond Unlimited comic book, in which John and Shayera finally reconcile and settle down to raise a family in Africa. Though these events are not considered canonical to the DCAU storyline as the issues were created by independent writers not associated with DCAU production.

In addition to John, Shayera shows a strong friendship with the Flash that is touched on several times through both the JL and JLU series, usually in a sisterly way, including him being the only one to hug her goodbye after her decision to resign. In the Justice League Unlimited fifth season's debut episode, "I Am Legion", Flash says, "She loves me. She's like the big sister I never had. Only, you know... short."

Later Hawkgirl meets archaeologist Carter Hall, who claims they are the reincarnations of two Thanagarians, Khufu and Chay-Ara, who landed on Earth thousands of years ago, and became rulers of Egypt. The Shadow Thief captures them and Green Lantern and uses Thanagarian technology from that era to show them what happened. After Shayera had an affair with the military leader and closest friend of Katar Bashari, apparently the past John Stewart, due to her husband not spending enough time with her, they were poisoned by the Priest Hath-Set who heard Carter wish they were dead. When he found out he poisoned himself.

opening scene of the justice league 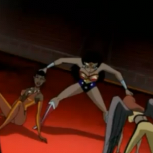 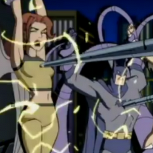 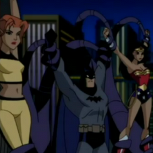 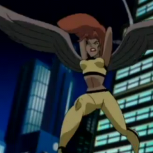 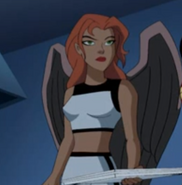