Justice League
Hawkgirl is a warrior from the planet Thanagar, married to the soldier Hawkman, who came to Earth to become a hero.

When Shiera attempted to kidnap a political official, she was shocked out of the sky by Black Lightning, then subdued by Huntress. For a while, her disappearance went unnoticed because of Martian Manhunter's transformation into her so that he could act as a spy for Batman and the Insurgency.

When Damian discovered this ruse and reports it to the Justice League, they revealed Bruce's identity to the world. Batman releaseed the real Hawkgirl to the League subsequently.

Hawkgirl's Thanagarian husband Katar Hol came to Earth, hunting for his wife, furious that she had returned to the planet without his permission. Hawkgirl eventually defeated Hawkman in combat, telling him that she did not have to listen to him and threatened to kill him if he ever bothered her on Earth again. [1]

Injustice: Gods Among Us

Free of his brainwashing, Hawkgirl exacted revenge on the High Councilor for murdering her husband Hawkman. She was nevertheless sent to prison for her role in the Regime. One night, she awoke hovering above her cot glowing with eldritch light.

An instant later, she stood at the bottom of a shallow crater. There she found the source of the light: a meteorite of pure Nth Metal. As she touched it, the meteorite sprung to life, encasing her in Nth Metal. The new armor made Hawkgirl invincible. Her first act: vengeance against those who had helped Superman capture Hawkman. 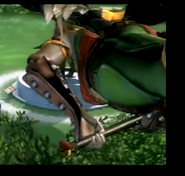 Add a photo to this gallery
Retrieved from "https://xianb.fandom.com/wiki/Shiera_Hall_(Injustice:_The_Regime)?oldid=403798"
Community content is available under CC-BY-SA unless otherwise noted.