Departing Suna on a Thunder Train to participate in the Chūnin Exams held at Konohagakure, Shinki expressed his belief that his team would achieve victory and would not sully his adoptive father's name. He exclaimed that the other teams would be no problem for them. In the first round, the genin had to answer a truth or false question. To their surprise, it was trick question that automatically caused the genin to fall into an pit of ink. However, Shinki is able to use his Iron Sand in time to keep him and his teammates afloat, allowing them to pass the round. Three days later, for the second round of the exams, Shinki's team competed in a game of capture the flag against Team 5. While Araya and Yodo guarded their flag, Shinki managed to defeat Denki Kaminarimon and Iwabee Yuino. Asking not to be disappointed, Shinki effortlessly blocked all of Metal Lee's attacks, leading to him capturing Team 5's flag after he became distracted by anger. 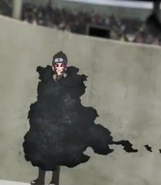 Add a photo to this gallery
Retrieved from "https://xianb.fandom.com/wiki/Shinki?oldid=397132"
Community content is available under CC-BY-SA unless otherwise noted.