Humans
Slade Joseph Wilson (a.k.a. Deathstroke the Terminator), or commonly just referred to as Slade, is the archenemy of the Teen Titans.

In "Terra-ized", Terra used Beast Boy to steal information from the Titans for Slade. Though he was not seen or heard, Terra did call him at one point in the episode. In the end, Terra failed to deliver the information to Slade when Raven banishes her to another dimension, which later reveals to be a trash hole in "Be Mine".

Slade makes a brief appearance in the comic Silicon Valley Cyborg. When Robin asks Cyborg if he can be the VP of security, Cyborg tells him that he has already given the job to Slade. And with that, Slade sneaks up behind Robin and smacks him on the head.

Throughout the show there are small, brief hints of Slade, such as on Robin's punching bag in "The Date".

Teen Titans go to the movies 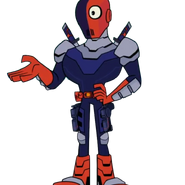