Sonia Alcana's family once owned a shop in Gotham City when she was younger. After they refused to pay protection money, Rupert Thorne had the shop burned. Sonia was trapped by the fire in her bedroom, but Batman saved her. She picked up a batarang and kept it as a souvenir.

The loss of the shop tore Sonia and her family up. Everyone knew Thorne was responsible, yet there was no way to prove it. Sonia dedicated herself to destroying the gangster's career. She trained in extensive martial arts and became a member of the Gotham Police Department. When she realized that this wasn't enough, she teamed up with friends Kathy Duquesne and Rocky Ballantine to create the identity of Batwoman.

Sonia and her fellow Batwomen plotted to destroy Penguin and Rupert Thorne's weapons factory, but had no idea as to where it was. So instead, they focused on destroying the weapon transports. She finally found out where the weapons came from after seeing a key hanger her partner Bullock found. She passed the information along to Kathy Duquesne, who donned the costume to blow the factory up.

They found out where Penguin was: the S.S. Naiad, a chartered cruise ship. Kathy went in to plant a bomb, but was caught. Sonia, Rocky, Batman and Robin came to her aid. The ship was utterly destroyed as the bomb went off during a fight between Batman and Bane, and Sonia had to save Batman from falling.

With the weapons ring out of commission and the people responsible in jail, the women retired Batwoman and Sonia resigned from the GPD; stating that while Jim Gordon may be willing to work with a vigilante discreetly; even he would not employ one. Sonia expressed a desire to move away from Gotham and find a place where "capes where not the prevailing fashion" Before she left, Batman gave her evidence she helped release Rocky's fiancé Kevin from prison. 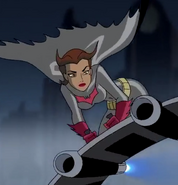