S.H.I.E.L.D.
Agent Stan Lee is one of the founding members of S.H.I.E.L.D.He was responsible of thinking up the acronym Strategic Homeland Intervention Enforcement and Logistics Division. He was placed at Midtown High School as the Janitor to keep an eye on Peter Parker.

Stan is the local janitor at Peter Parker's school which was Midtown High. Stan is first seen taking Peter out of the locker Flash Tompson threw him into. He wants Peter to stand up for himself, but he does not listen.

ould be Spider-Man, she considers Stan as one of the suspects, but he turns to her and in a Spider-Man stance goes "Thwip, Thwip!

He is trapped by a trap made by Taskmaster when he takes over the school. He is saved by Spider-Man, and then, despite White Tiger telling him to stay still, he falls down a hole caused by a trapdoor.

Stan appears in a thought of what it would be like if Spider-Man revealed his identity to the world but completely laughed at him.

Stan the Janitor, Peter, MJ and Harry battle the Lizard who raided Midtown High to steal equipment from the school with Principal Phil Coulson in the process. Stan tells people to go for help which gives him time to put on his Spider-Man suit Lizard attacks Spider-Man in the dark only for Stan the Janitor to end up fending off Lizard. While in the boiling room, Spider-Man is attacked by Lizard and fights him until Lizard captures Harry Osborn as well when he got in the way of a tech panel. Spider-Man then enters the tunnels beneath Midtown High Schools to follow Lizard into the abandoned subway tunnels until Lizard floods the tunnel and makes off with Mary Jane Watson. 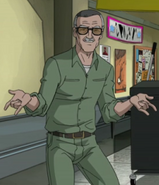 Add a photo to this gallery
Retrieved from "https://xianb.fandom.com/wiki/Stan_Lee_(Earth-12041)?oldid=297488"
Community content is available under CC-BY-SA unless otherwise noted.