As revealed in the original series, Starfire was Koriand'r, an alien princess from the planet Tamaran who was in line for the throne. When the powerful Gordanians invaded the planet, her devious sister Komand'r (aka Blackfire), wanting the throne for herself, took the opportunity to convince the Gordanians to capture Koriand'r as Tamaran's soon-to-be-queen, in exchange for peace and her place in the throne. Koriand'r went with them convinced it was for the good of her planet, only to discover Komand'r's treachery and the Gordanians' plan to bring her to their Citadel to live out the rest of her days as a tortured slave. Koriand'r then managed to escape during space flight and fled to the nearest planet, Earth. The Gordanians followed in hot pursuit, but were defeated when Koriand'r was defended by four superpowered teenagers. Once she was officially free of the Gordanians, Koriand'r decided to stay on Earth, took the name Starfire (which is what Koriand'r translates to in English), and joined the other heroes in forming the Teen Titans.

Starfire reprises her role from the original Teen Titans (Series) as the quirky, compassionate, yet powerful alien of the team. Even though she is often the one to ask the meaning of a word, she is extremely loyal and kindhearted, putting her friends before herself. Her usual mood is extremely friendly, but she will flip into a rampage if a friend/loved one is in danger or betrayed her. She can often cause chaos in a rampage.

Starfire dresses in a purple two-piece suit. The top half covers her chest while the bottom section is a miniskirt. She has grey gauntlets, and tall purple boots with stars on the soles and long purple-gray socks underneath. She has pale orange skin, slightly pointed ears, long hot pink hair, tiny pink eyebrows and green eyes with the sclera of her eyes being light green along with large feminine eyelashes. Her hair curls over in bangs right above her eyes, and she has tendrils of hair in the front. As seen in "Dude Relax" and "Laundry Day", she is seen wearing a pale pink bathrobe and towel on her head, which indicates that she enjoys wearing pink when relaxing.

Starfire's powers derive from her Tamaranean biology. Like Kryptonians (for example, Superman), Tamaraneans are basically solar batteries who convert ultraviolet light into superhuman abilities. The Tamaranean powers are also fueled by emotions. 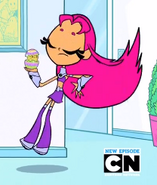 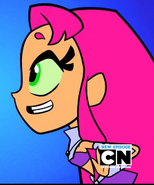 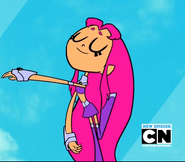 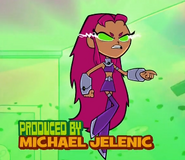 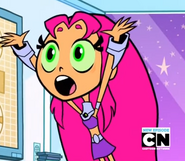 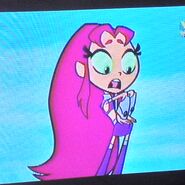 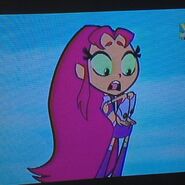 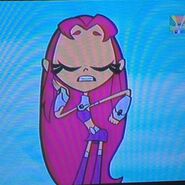 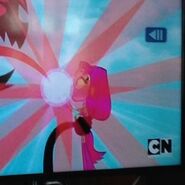 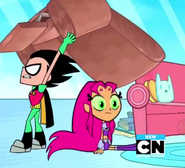 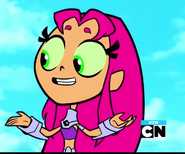 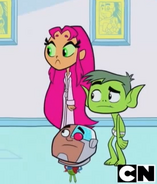 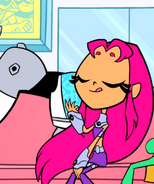 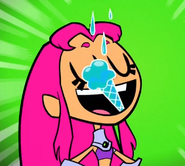