Sunny is Gwen and Ben's Anodite cousin who appears in the episode Girl Trouble. She is Verdona's granddaughter.

Sunny was banished to Earth by her parents because she was dating and in love with an alien named Antonio, who appeared to be disliked by the family for hanging out with a bad crowd. She was exiled to Frank and Lili's house for the summer (much to Lili's chagrin and Gwen's annoyance). But when she caused more trouble on Earth than she did on Anodyne (almost unleashing a nuclear explosive on Bellwood), her grandmother Verdona fetched her and took her back to their home planet.

Sunny reappeared in The Most Dangerous Game Show, where she is among the contestants to compete for Ben's hand in marriage. However, she was quickly eliminated before the competition started after Ben told Zenith that they were cousins. 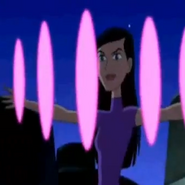