Susan Test is the twin sister of Mary Test and is the youngest of the two twins. She is one of the tritagonists of the series.

Susan is a super genius scientist. She is the younger twin of her sister Mary. Susan has been shown to be less empathetic and sympathetic than her sister. Like her sister, Susan harbors a deep love and obsession for Gil.

Bling-Bling Boy (A.K.A Eugene) has a huge crush on Susan but whenever he gets her to fall in love with him it always fails, mainly because Johnny foils him or Susan turns him down (Susan always rejects Bling Bling Boy's advances, as she finds him repulsive). Like her sister, she attends school at the Porkbelly Institute of Technology. Susan is prone to believing in the more scientific and logical explanations for things rather than the illogical and magical explanations. Her sister is more open-minded, and Mary is frequently proven correct. Susan seems to be less level-headed than her twin Mary, and tends to be less conservative, as she speaks her mind much more frequently. 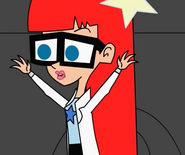