Humans
Talia Al Ghul is the daughter of Ra's Al Ghul and a high ranking member of the League of Assassins. Once Ra's became aware of Batman, he chose the Dark Knight to be his successor. Batman refused the offer but he and Talia had developed feelings for each other. At some point, Talia gave Batman a spiked drink and had a sexual trist. The one night stand became rumor in the criminal underworld but Talia managed to keep her pregnancy secret. She had a son and named him Damian.

Years later, after Deathstroke led an assault on the Tibetan compound, Talia quickly took Damian to safety then joined the battle. She took a bow and arrow and killed one of the helicopter pilots. Talia then ran up the wall, took an assault rifle off one of Deathstroke's men and opened fire, and made it to one of the defense towers. She rained arrows on Deathstroke's forces. Talia rushed after Damian once Ra's was mortally wounded and stopped him. Even she recognized Ra's was beyond healing. Talia knew they had to stay on the move and took Damian to Gotham City to meet his father. She tracked Batman to a biotech firm and saved him from Killer Croc with a well-timed taser. Batman and Talia retired to her yacht, where they briefly recalled the last time she gave him a drink. Talia had no time for small talk and mourning. She had to act before Deathstroke could completely take over the League of Assassins. Damian was left in Batman's custody.

alia tracked Deathstroke to Ra's' Interlaken compound and led a raid. However, they set off explosives. Talia managed to kill a few before being knocked out by Deathstroke. She was imprisoned and tortured. After Batman and Robin freed Dr. Langstrom from the Gotham Coliseum, Deathstroke realized Robin was Damian and Talia's romance with Batman wasn't rumor after all. Talia refused to reveal who Batman was and warned Deathstroke they would find him soon enough. Deathstroke took Talia with him to the Outer Hebrides and left a recorded message with Rebecca Langstrom, to be given to Robin in secret. Robin took the bait and went to face Deathstroke alone. In the face off, Talia took a bullet for Robin. Batman arrived and intervened. While Robin chased after Deathstroke, Batman placed Talia in the Lazarus Pit and revived her. She was pleased her hunch about Batman saving them was correct. Their kiss was interrupted by the facility's imminent collapse. Talia and Damian were reunited but she beckoned him and Batman to an escape pod.

Nightwing, piloting the Batplane, spotted the pod surface and towed it to safety. Talia summoned assassins and thanked Batman for saving her's and Robin's lives. She vowed to rebuild the League of Assassins and make it stronger then offered Batman to join her. Batman insisted she just disband the League and that Damian should stay with him. Talia, at first, believed Damian should be with his mother but she relented and ordered Damian to learn from his father. Talia declared she would come back for Damian and directed Batman to make him great. She departed aboard her yacht. Good on her word, Talia took over the League and began preparations to succeed where her father had failed.

Talia took on the Heretic, a clone of Damian put through a process of accelerated growth, as her chief agent. She came up with a plan to take over the world by brainwashing attendees of the upcoming World Tech Summit, world leaders, military officers, and corporate officers. In one move, she would have influence in every country. They recruited a small group of criminals known to have battled Batman in the past to join her organization, now called the League of Shadows. Heretic used the group to instigate a turf war between the Black Mask mob. As anticipated, Batman eventually confronted them. He was captured during a skirmish on the docks and taken to the Sisters of Perpetual Grace convent outside of the city. Over the course of two weeks, he told them of a secret technology vault on sub-level three of Wayne Tech. Heretic's team managed to procure a component from the vault despite interference. Mad Hatter, meanwhile, was not making fast enough progress with programming Wayne. Talia drew Onyx's sword and held it at Mad Hatter's neck. She implored him to dig deeper past the trauma to the boy Wayne was before his parents were murdered. She stated if they broke that child, Wayne would be theirs.

Heretic reported the encounter with a Batman and Robin at the vault. Talia quickly surmised Dick Grayson took on the mantle in Wayne's absence. Heretic emphasized he saved Robin's life and suggested he should be brought to their base. Talia shot down the request, stating she preferred to keep him at arm's length. Heretic surprisingly disobeyed her and kidnapped Robin with the intent to steal his memories and fashion himself a soul to end his suffering and truly be Talia's son. Talia stopped the procedure before it could happen and was irate with Heretic. He dropped to his knees and begged her permission. She realized he was flawed and shot him dead. She ordered Onyx to dispose of the body and for Robin's memories of this incident to be erased and make necessary adjustments to his personality. Recalcitrant and emotional, he was of no use to her. Luckily, a tracker was concealed on Robin's suit and Batman and Batwoman stormed the convent. They were soon joined by Batwing. Tusk reported the development to Talia. Alarmed of three intruders, Talia deemed the compound expendable and ordered a retreat. She, Hatter, Calculator and Tusk left with the technology.

A week later, Talia learned Batwoman had a hard drive recovered from the convent. Her father Colonel Kane, who was programmed at some point, was activated but he failed to kill her. Talia infiltrated the summit as a blonde attendant and escorted Bruce Wayne onto the front stage for his keynote address. Mad Hatter, Calculator, and Tusk took command central and hooked up their tech to being the brainwashing program. Firefly notified the others of the arrival of Nightwing, Robin, Batwoman, and Batwing. Talia, Batman, and Tusk cut them off. She issued an ultimatum to Robin, join her or die. Batwoman and Talia fought each other one-on-one until the Watchtower Initiative craft grazed the side of a building. Batwoman was nowhere in sight. Talia caught up to Batman and Nightwing. She tossed a gun to Batman and ordered him to finish off Nightwing. Robin appeared and realized all she cared about was control and not Ra's' vision of a better world. Talia changed her mind and ordered Batman to kill him first.

Nightwing pleaded with Batman not to kill, not to let her win, or to lose his soul. Talia bragged she cleansed his soul of pain. Nightwing continued and reminded Batman he brought them together because he was the only one who understood their pain and lonliness and that he was the best man he ever knew. Batman fought the programming but couldn't break it so he held to gun to himself. Talia had enough and drew her sword on Nightwing. Batman shot the sword out of her hand and fell over. Batwoman caught up and socked Talia for her father. Batwing arrived and cut off her escape as well. Surrounded, she wondered how she could have loved Bruce and Damian Wayne for the last 12 years. She pulled a grenade and mused she would have Batman in death. It was ruse and she blew a hole in the window and jumped aboard her transport. After Talia turned off the autopilot function, Onyx suddenly slipped into the cockpit and attacked her. Batman, Nightwing, Robin, Batwoman, and Batwing watched as the transport crashed into the waters outside the city. 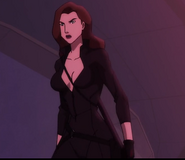 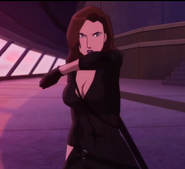 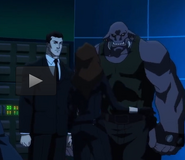 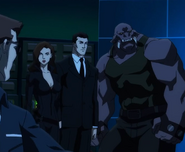 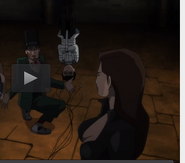 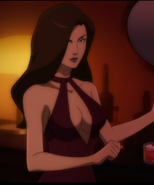 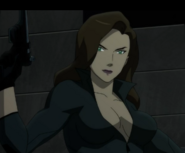 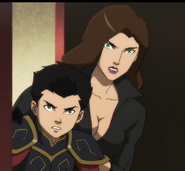 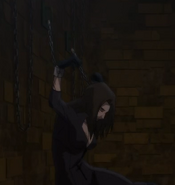 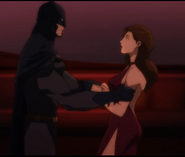