Tanya is the girlfriend of Bobby Briggs, the man who shot and paralyzed Joe Swanson. When Bobby escape from police custody in "Joe's Revenge" and the police chief refuses to let Joe on the case, the guys set off on their own to catch him. They go to see Bobby's girlfriend Tanya in Atlantic City where she works as a stripper. She refuses to answer Joe's questions, but Quagmire first tries to get her to lap dance for him and talk and then resorts to a "Vulcan V-meld"; a form of mind-reading via her vagina, to get Bobby's address from her.

Before they leave, Quagmire gets her to spit into her own mouth. 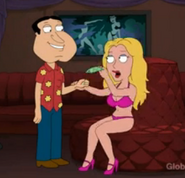