The Grand Inquisitor, also referred to simply as the Inquisitor, was the name used by a male Pau'an who held the title of Grand Inquisitor of the Inquisitorius of the Galactic Empire in the years prior to the Battle of Yavin. The Inquisitor hunted and eliminated Jedi that had survived the destruction of the Jedi Order. Trained in the ways of the Force by Darth Vader, he was tasked with converting or destroying Force-sensitive children, as well as Jedi who could train them, before they could become a threat to the Empire. To accomplish his tasks, the Inquisitor studied the records of the Jedi Temple, giving him insight into the Jedi and their fighting style. As a result, he was a deadly foe for any surviving Jedi.

After being informed of the actions of a group of rebels on the Outer Rim world of Lothal, the Inquisitor took an interest in both killing Kanan Jarrus and converting his apprentice, Ezra Bridger to the dark side. His first attempt came when rumors of Jedi Master Luminara Unduli's survival led the rebels to the Imperial prison known as the Spire where the Empire was allegedly holding her. However, it was a ruse designed by the Empire to lure surviving Jedi into a trap. Although the Inquisitor failed to capture the two Jedi, he began his hunt for the two and headed to Lothal to track them. During thefifteenth anniversary of the Empire's birth, the Inquisitor came face to face with the two Jedi once again. During a confrontation on Fort Anaxes, the Inquisitor defeated Jarrus and tried to turn Bridger to the dark side, but the Padawan used his power to summon a giantfyrnock, who distracted his opponent long enough for the Jedi to escape once again.

Weeks after the confrontation on Fort Anaxes, Grand Moff Wilhuff Tarkin arrived on Lothal to take over the track for the rebels. Warning the local officials that failure would now have consequences, Tarkin had the Inquisitor execute two Imperial officers for their constant failure to stop the rebels. On Tarkin's orders, the Inquisitor and ISBAgent Kallus set a trap in which they successfully captured Kanan Jarrus. Interrogating the Jedi about his knowledge of a larger rebellion, they failed to break him and Tarkin ordered that he be transferred to an Imperial facility on Mustafar. When the rebels staged a rescue, Bridger managed to break his Master out of his cell aboard Tarkin's flagship, the Sovereign. The Inquisitor confronted them in the ship's reactor room where, after initially winning and nearly killing Bridger, Jarrus turned the tide by embracing the full power of the Force, allowing him to defeat his enemy. Hanging onto a walkway above an exploding reactor, the Inquisitor warned Jarrus that something far worse would come for all of them because of his defeat. Knowing the price he would have to pay for his failure, he let himself fall to his death into the exploding reactor.

The Inquisitor is described as cold and analytical. His intensity is based on the assignment he is on and he tends to stay calm.

Driven in his task of hunting and eliminating the Jedi, he appears to have studied the Jedi Temple records to an advanced and thorough degree, as he correctly determined Kanan to have trained under Jedi Master Depa Billaba after only a few traded blows in their first lightsaber duel; identifying him from the lightsaber form he used and the way he used it.

The Inquisitor appears to have some interest in Ezra, as a few times during their first encounter, he tried to sway Ezra into following the Dark Side and shake the boy's faith in his master, Kanan. When they met again, the Inquisitor made it clear he desired Ezra as an apprentice.

Being tasked with hunting down and routinely killing innocent Force-sensitive beings, the Inquisitor rarely showed any mercy and didn't hesitate to kill unarmed children if his assignment called for it. With his own fellow Imperial officers, however, he took a stance unlike his master Darth Vader's; never punishing lower-ranking officers for their shortcomings and appeared to accept the burden of responsibility for his own failures. He was reluctant to a degree to execute Commandant Aresko and Taskmaster Grint at Grand Moff Tarkin's orders, but carried it out nonetheless.

The Inquisitor held a deep respect for his superiors, like his master, Darth Vader, and Grand Moff Tarkin, although with the former it was founded primarily on fear as the Inquisitor ultimately took his own life rather than face Vader's wrath.

Although the Inquisitor was a devoted agent of the Empire, he was capable of showing respect to those he deemed worthy, as he saluted Kanan in their final duel.

He notably sported blood-red, dark-side tattoos stretching down from his eyes and on his forehead, either to show his welcomed affliction with the Force or to strike fear into his enemies.

The Inquisitor wore dark-colored battle armor, accompanied by various features such as grey stripes and an Imperial insignia on his shoulder plates.

He also used a double-bladed spinning lightsaber elegantly, which was designed to end battles quickly, efficiently, and with a minimum of effort. The Inquisitor's lightsaber was equipped with several modes, such as the crescent-mode that keeps it single-bladed. There was also a disc-mode where a second blade is drawn, during so both blades can spin across the disc. Its unique design served to unnerve the Inquisitor's enemies, particularly among the Jedi he hunts.

The Inquisitor also was in ownership of a TIE Advanced v1 prototype. 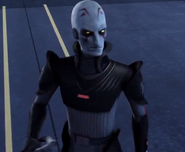 Add a photo to this gallery
Retrieved from "https://xianb.fandom.com/wiki/The_Inquisitor?oldid=398539"
Community content is available under CC-BY-SA unless otherwise noted.