Majin Buu War of the Universe

Tien Shinhan , commonly just called Tienin the English dub of Dragon Ball Z, is heavily devoted to martial arts, reclusive and disciplined, Tien Shinhan is one of the strongest Humans within the Dragon Ball universe. He battles alongside the other Z Fighters when major threats to the Earth surface, often courageously engaging enemies far more powerful than himself. However, he spends most of his time training with his lifelong best friend, Chiaotzu.

Five years after the tournament, Tien learns that Goku has died in battle against an amazingly powerful warrior called Raditz, a Saiyan who was Goku's brother. Even more disturbing is that two more Saiyans, both more powerful than Raditz, are on their way to Earth and will be there in about one year.

In the early days, the wild Launch developed a bit of an infatuation with Tien, and she continues to chase him wherever he goes. Tien wastes no time, and is invited, along with Yamcha, Chiaotzu, Yajirobe and Krillin, to train at Kami's Lookout so they can aid Goku when he is wished back to life in a year, after he completes his training with King Kai. In filler during this period, Tien and the other Z Fighters on Earth fight Shorty and Scarface, two illusion Saiyans they met on Planet Vegeta when using the Pendulum Room at Kami's Lookout to go back in time. Tien and his friends are overpowered greatly by the Saiyans, before they are transferred back to Kami's Lookout. The experience frightens Tien and the others, so they continue to train as hard as they can.

When the Saiyans finally do arrive, the Z Fighters decide to hold them off until Goku can arrive. Tien and Chiaotzu eventually find the Saiyans, Piccolo, Gohan, and Krillin's location, and join them, soon followed by Yamcha. Vegeta, deciding to toy with his opponents, has Nappa grow several Saibamen in the soil so that he can hold a small challenge. Knowing that they have to buy time, the Z Fighters agree to this, and Tien volunteers to go first. He manages to quickly defeat the vicious creature, causing Vegeta to destroy it for incompetence.

After all the Saibamen are killed, Nappa decides to enter the fray himself, taking on Tien as his first opponent. Tien is no match for the giant warrior, and has his left arm ripped off in a single hit. Immediately, Tien tries to use levitation to escape, but is quickly smashed to the floor in the second hit. Seeing this, Chiaotzu sacrifices himself with a a self-destruction attack against Nappa, but it was in vain as Nappa remains unharmed and starts to fight with the now ally Piccolo and Goku's son, Gohan.

Tien, enraged by the death of Chiaotzu, puts all his remaining strength into one final Tri-beam through his remaining right hand, killing himself from exhaustion in the process. The attack manages to do serious damage to Nappa's armor, but does not seriously damage the Saiyan warrior. In the anime however, Nappa goes as far as to praise Tien's efforts, claiming that had his aim been better, it would have seriously injured him. The attempt also shocked Vegeta, as he was the one to warn Nappa of its power and stating that if he had not warned Nappa, it could have killed him.

Because of the influence of Kami, after he perished, Tien was allowed to train on King Kai's planet in the Other World as Goku did earlier. Joining him were the other warriors who also perished in the battle against the Saiyans, Chiaotzu, Piccolo and Yamcha. On King Kai's planet, King Kai contacts Goku and tells him that his friends all crossed Snake Way in a far shorter time than he did, and that they all requested for tougher training than what Goku had received.[16] Prior to beginning his training with King Kai, Tien has difficulty making King Kai laugh during the prerequisite joke-telling test. In order to finally deliver a successful joke, Tien must literally power up and use the Multi-Form technique as he aggressively declares "You can tune a piano, but you can't tune a (tuna) fish" in the English version, and "You think what's up your nose is a secret but it's not (snot)" in the Japanese dub. Tien, along with Chiaotzu and Yamcha, remains on King Kai's planet and learns of everyone's (Goku, Vegeta, Krillin, Gohan, Dende and Piccolo fused with Nail) mighty struggle with the evil tyrant Frieza on Namek. While there, in a filler scenario, King Kai calls upon the deceased Ginyu Force (excluding Captain Ginyu) to challenge Tien, Yamcha and Chiaotzu. Tien takes on both Jeice and Burter, and disposes of them rather quickly and easily, showing off how much stronger he had gotten. Knowing the Ginyu Force at one time defeated Vegeta, gave them all a sense of pride. Tien is eventually wished back to life along with Chiaotzu by a wish made to Porunga. Once back on Earth, Tien and Chiaotzu go into solitude, training in the mountains.

A year later, while Tien and Chiaotzu are training in the mountains, they are interrupted when they sense two powerful evil energies heading towards Earth. They then fly to the location of where the power is coming from. Both Tien and Chiaotzu are surprised to find Vegeta (who was somewhat reformed during the crisis on Namek and now resides on Earth with Bulma) and the other Z Fighters who inform them that the power they are detecting is Frieza's, who somehow survived Namek's destruction. When Frieza does land, he is quickly dispatched by an unknown mysterious youth (Future Trunks). Piccolo, overhearing the young Super Saiyan's private conversation with Goku, tells everyone the warning that two incredibly powerful Androids will attack in three years time and defeat everyone with the exception of Gohan (and, of course, Future Trunks, but Piccolo does not make mention of the youth in order to keep his identity a secret). During the three years of training, Tien trains alongside Chiaotzu across the Earth and his power increases.

The three years soon pass and the Z Fighters head to the location where the androids soon appear. Tien tells the other Z Fighters that he left Chiaotzu behind as he felt that even though they trained, he would not have been able to keep up in the battle. After Gero destroys half of the city where they appeared, Goku, Piccolo, and Tien fly off to a different location with the Androids following. Tien notices that Goku is already tired and out of breath just by flying. It is revealed Goku's deadly heart virus is the cause of this lack of energy.

Tien himself does not do any fighting until Android 16, Android 17, and Android 18 appear. He attacks Android 17, but is quickly over-powered, and ends up being choked until he is dropped.

When the Androids leave to continue their pursuit of Goku, who is recovering from a heart disease, Tien goes off with Chiaotzu to train and become powerful enough to help against this new threat. He is soon interrupted from this to lend his aid in hunting for the new menace, Cell.

When Perfect Cell declares his Cell Games, Tien decides to remain on the sidelines out of the fight; he even is given the chance to enter the Hyperbolic Time Chamber, but declines the invitation stating he has no chance against Cell. He does however get thrown into the mix when Perfect Cell spawns seven Cell Juniors to torment the Z Fighters, in an effort to make Gohan angry. Despite a severe beating by the small creatures, he does get in a hit with Yamcha while saving Goku (anime only). He and the other Z Fighters soon saved from the Cell Jr. by Gohan, who turned Super Saiyan 2.

During Gohan's final battle with Super Perfect Cell, as he feels a lot of guilt for letting Goku sacrifice himself (especially as Goku was largely the reason he trained extensively at martial arts), Tien along with Piccolo, Yamcha, and Krillin blast together Cell from behind him in order to aid Gohan and vows to not let Gohan die. The Z Fighters are eventually brushed aside by Cell who is then finally defeated by Gohan with the help of Vegeta. At Kami's Lookout, Tien tells the other Z Fighters that they will most likely never meet again (which stays true for at least 7 years). Saying farewell, he flies into the distance.

There is one skill that I have improved upon that even you can't keep up with. And it so happens to be the most important tool in a successful attack. And that is the skill of Speed. Im impressed im moving at traffic speeds and yet you're still tracking me. But just because you can see me doesn't necessarily mean you know where I am or what I am doing.

In addition to his arsenal of techniques, Tien Shinhan can see through simple illusions (i.e. the Afterimage Technique) owing to his third eye. He also possesses the ability to move each of his eyes independently, allowing him to look in multiple directions at once. This appears to enhance rather than compromise his vision like it would in real life, considering that he uses this talent while seeing through Roshi's and Goku's Afterimage Strike.

Tri-Beam – One of Tien's signature technique's. He unites his hands at the tips of the fingers and aims at his target between his fingers and his thumbs. Then he shoots a powerful energy blast to hit it. This is a very dangerous attack, because it uses up most of user's health so this one has to control how much energy he is putting into the blast in order to not over use it. Later Tien makes this attack more powerful and calls it the "Neo Tri-Beam". It is also called the "Ki Blast Cannon" in Budokai Tenkaichi video game series. 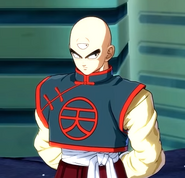