Tokiwa (トキワ, Tokiwa) is a kunoichi and the attendant of the current leader of the Nadeshiko Village, Shizuka.

After Kokuyō found them on their way to the Land of Fire, she declares that she would stop him. However, Shizuka tells her that this is her duty and easily dispatches her would-be pursuer. After seeing Naruto who tells her that he is the student of Jiraiya, Tokiwa explains that Naruto would have to battle Shizuka for his hand in marriage as per the agreement Jiraiya had made some years ago. Naruto declined the offer, but Tokiwa tracked him down and told him about Shizuka's past.

After pursuing Naruto, who finally agrees that if he defeats Shizuka, he would marry her, Tokiwa creates an arena with her Earth Release: Iron Fist Prison. After the battle is concluded, Kokuyō once again tries to capture Shizuka, but she dispatches him with ease once again. However after Kokuyō's Hundred Puppet Soul Binding is activated, Tokiwa realises that all the puppets and attacks before this were just distractions for this technique. After Naruto rescues Shizuka, they head to the harbour to see them off. Glad that Naruto's words had reached Shizuka, she heads back to the village with Shizuka. 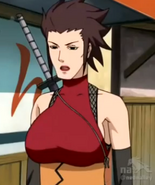 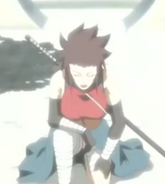