Bato of the Water Tribe

Earth Rumble
Toph Beifong is an earthbending master, one of the most powerful of her time, and the discoverer of metalbending. Blind since birth, Toph was constantly treated condescendingly because of her disability, particularly by her overprotective parents, Lao and Poppy Beifong. Upon discovering badgermoles, earthbending animals who were also blind, she learned how to use earthbending as an extension of her senses. This gave her the ability to "see" every vibration that passes through the ground.

Having developed her own unique style of earthbending, Toph acquired a toughened personality and became famous for winning underground earthbending tournaments under the name "The Blind Bandit", doing so behind her parents' backs.[10] Although initially uninterested in directly aiding the war effort, she eventually chose to leave behind her old life, and travel with Avatar Aang and his friends as his earthbending teacher, when her parents finally became unbearable for her.[1] Toph's total mastery over earthbending, unique personality, and thoughtful pragmatism made her a valuable addition to the team.

After Republic City's formation, Toph became the city's first Chief of Police, forming the Metalbending Police Force to help maintain order.[11] She had two daughters with two different men: Lin, who succeeded her as Chief of Police, and Suyin, who created the metal city of Zaofu. Toph eventually set out to roam the world in search of enlightenment[12] before settling down in the Foggy Swamp.

The trio went to the town of Gaoling to continue their search for an earthbending instructor. While searching, Aang received a free earthbending lesson from a man named Master Yu, but he found that Yu cared more about having him pay for lessons than he did about teaching. Afterward, they overheard a pair of studentsdiscussing Earth Rumble VI, a tournament featuring several powerful earthbenders. The boys were not very inclined to inform Aang of the tournament's location, until Katara secretly used her "feminine charm", which involved freezing them to the walls, to coerce them to tell.

At the tournament, they witnessed a powerful earthbender named The Boulderdefeat every challenger he came across. Sokka became completely enthralled in the spectacle, but Aang was not very impressed, saying that The Boulder was "just listening to his big muscles" as opposed to listening to the earth. After vanquishing all other contenders, The Boulder confronted the current champion, the Blind Bandit, a blind twelve-year-old girl. Aang noticed the Bandit's techniques, especially how she waited and listened carefully to the movements of her opponent and realized she was the master of neutral jing Bumi had been encouraging him to find. He also realized that she was the girl whom he had envisioned in the swamp.

After the Bandit effortlessly defeated The Boulder, the host of the tournament, Xin Fu, offered a large sum of gold to whoever could defeat the Blind Bandit in a fight. Seeing an opportunity to talk to the Bandit, Aang challenged her. The Bandit, however, was ready for a fight and refused to engage in conversation, instead launching a boulder at Aang. She was not prepared, however, to face an airbender and was defeated when Aang blew her out of the ring. The Bandit took badly to her loss and stormed off, refusing to listen to Aang when he beckoned to her.

Aang and the others returned to Master Yu's school to try to find out where the Blind Bandit lived. They approached the students they had confronted earlier, both of whom were quite intimidated by Katara. They did not obtain much information; however, Aang recalled the flying boar he had seen with the girl in his vision. The boys stated that the flying boar was the symbol of the Beifong family, the wealthiest family in the town.

Aang and company traveled to the family's house, where they were accosted by the Bandit, now wearing the same dress Aang had seen her wearing in the swamp. The girl, named Toph, refused to aid Team Avatar and called the house guards to chase them off.

That evening, Aang used his status as the Avatar to gain a formal audience with the entire Beifong family. He attempted to gain her father's support regarding Toph aiding him, but Toph used her earthbending to keep him from saying anything revealing. Her parents and teacher were completely unaware of her true skill, and she wanted to keep it that way. After numerous interruptions, Aang retaliated by sneezing, bringing the dinner to both a premature end and into everybody's faces.

After dinner, Toph called a truce with Aang and recounted her history. Her parents perceived her as a weak and fragile child due to her blindness and severely restricted her freedom. From an early age, she began sneaking out of the house and mastering earthbending on her own, secretly competing in tournaments and surpassing her "teacher" in skill. The pair was suddenly ambushed and captured by Xin Fu and his stable of earthbenders, who suspected the two of duplicity earlier during the tournament. Toph was later freed and, after defeating Xin Fu's earthbenders, rescued Aang, an event her father witnessed.

Toph later confronted her parents, expressing her desire to accompany Team Avatar on their journeys. Her father denied this request and ordered Aang and the others to leave the estate. As the team prepared to depart, however, Toph ran up to them, saying that her father had ultimately granted her permission to travel with them. Before departing, she launched Aang into a tree via earthbending and, declaring them even, demanded to have her championship belt returned

In a remote Earth Kingdom forest, Team Avatar was pursued by a tank train operated by Azula, Mai, and Ty Lee. Their machine allowed them to cover great distances at high speeds; additionally, they were able to trace the team's whereabouts by following a trail of shed fur Appa consistently left. Aang and his friends were repeatedly forced to escape, depriving them of much-needed rest and draining the last of their power and patience. To make matters worse, Katara and Toph became tangled in a bitter conflict with Toph eventually leaving the group after a particularly acrimonious fight.

Aang attempted to deceive Azula by leaving a false trail of Appa's shed fur for her to follow, while Katara and Sokka retreated somewhere safe. Azula, however, unfolded his plan; she sent Mai and Ty Lee in the direction she believed the group to have gone and followed Aang's fabricated trail herself.

Aang's ultimately wound up in an abandoned town where he was later found and confronted by Azula. Zuko arrived on scene shortly after and all three assumed fighting stances, prepared to duel. Azula fired the first shot, hitting Zuko hard and knocking him back. All three exchanged blows until the duel was joined by Katara, Sokka, Iroh, and Toph. Azula was eventually cornered by the other six combatants. She surrendered and Iroh momentarily let his guard down, turning to see his comrades. Azula took advantage of this and launched a fire blast at him, striking him in the chest. Zuko let out a horrified cry, and all four benders unleashed their power against her; Azula, however, was able to escape the scene unharmed. Aang, Katara, Sokka, and Toph gathered around Iroh, but Zuko yelled for them to leave, backing up his words with a sweeping arc of flame. Respecting his need for privacy, Aang and the others fled.[7]

Let's Start with Move A Rock.

You've got to Stop thinking like an Airbender. There's no "different angle", no clever solution,no trickety trick that's gonna move that rock! You've got to face it head on.You Shouldn't give 100% of your Energy into any one Strike. You've gotta be quick and accurate. Hit a Series of points and break your opponent's Stance. And when he's reeling back you deliver the Final blow. His own Weight becomes his downfall.

The roots and vines run all over the world. I can see Sue and Lin and Republic City. The swamp can sense that you are out of balance. It will teach you what you want to learn. If you are open to listening.

Metalbending: According to Toph even block heads like Bolin could figure out Metalbending with the right instruction.

Techniques That She Knows 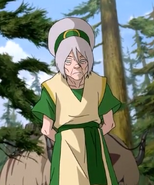 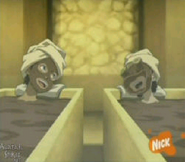