30 Minute Time Limit of the Fusion Dance
Trunks  is a protagonist in the Dragon Ball manga, and the anime series Dragon Ball Z and Dragon Ball GT. He is the Human and Saiyan hybrid son of Bulma and Vegeta, and later the older brother of Bulla. In the English dubs of the Budokai and Budokai Tenkaichi video game series, he is called Kid Trunks to differentiate with his alternate future counterpart.

After Cell's defeat at the hands of Super Saiyan 2 Gohan, Future Trunks returns to his time much more powerful than before, and effortlessly kills both Future Android 17and Future Android 18. He also planned to kill Cell in his time (in Trunks' time, Cell was still in his first form so he was easily defeated). After Future Trunks had destroyed the androids, he continued living in his time with his mother.

Trunks prepare to fire his Big Tree Cannon on Bio-Broly 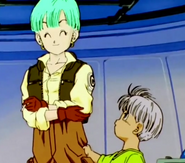